Just 24 hours after watching the SAO II finale, I read about this, via Kotaku: 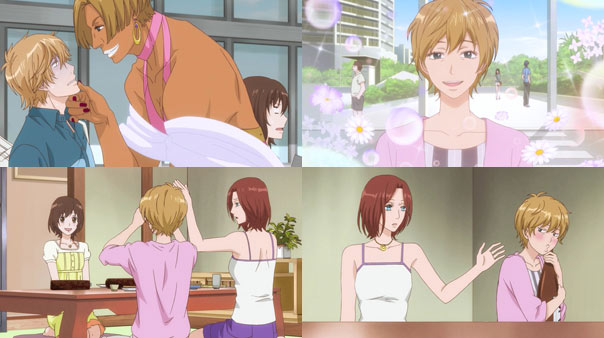 Our final episode has our wolf girl going toe-to-toe with Kyoya’s Mom—no, not the giant tanned lady, that’s Big Mama, who runs a nearby bar. The mom turns out to be basically as Kyoya described: your typical normal middle-aged lady. But as nice and cute as she is, there’s a tinge of sadness to her, which has nothing to do with the fact she gets drunk and passes out on the first night Erika is there.

No, Erika’s mom is not a drunk; but she does blame herself for Kyoya’s cold behavior and suspicion towards romance, a product of his parents separating due to various and ultimately mundane circumstances (bad luck, bad timing, what have you). Kyoya’s sis was old enough to accept it, but Kyoya dealt with the shock by closing his heart, which Erika was able to re-open, which led to his string of empty flings with women.

Even Erika remembers the Kyoya who was more like Nozomi…but even Nozomi is reformed at this point, thanks to Erika (she’s just been all over the place maturing men, hasn’t she?) Case in point: an exceedingly cute exchange between Nozomi and Ayumi, who is so inoculated against his charms that when he asks her out to the fireworks she assumes he’s up to his old tricks and ignores him. Still, I think they’d make an intriguing couple.

Back in Kobe, understanding a little more about the situation, Erika wants to help her treasured Kyoya make up with her mother. She devises a plan in which Kyoya ‘upsets’ her into wandering off that even had us going…

…Until we see her smirk and the wolf ears pop out. I like how she’s no afraid to use her ‘wolf girl abilites’; they may have been used for nefarious purposes in the past (like pretending Kyoya was her boyfriend to impress Marin and Aki in a desperate attempt to make friends with someone, anyone), but now she’s learned how useful they are for other purposes. Of course, when she’s on the phone using lies to get Kyoya’s mom to come to the festival, she pays a price for her ‘treachery’ when her necklace breaks.

Kyoya, who came to ‘protect’ Erika in the first place (knowing full well how cute she was and the fact that guys would hit on her if she was alone), is predictably worried when Erika doesn’t return from the bathroom, and he searches the fairgrounds with increasing worry with Reika until their mom arrives and does something that, while embarrassing, is the most effective way to find their lost girl: yelling really loud.

Kyoya finally overhears some put-off bystanders watching a filthy girl rustling through the garbage and discovers Erika. Reika tries to tell her it’s just an object; its the memories and emotions she still has that matter; Kyoya gets down on the ground and helps her search.

Not only that, while mom is watching her not-emotionally-wounded-after-all son help his cute girlfriend, the fireworks start and light up the space between the dumpsters…where she spots the pendant. All’s well that ends well. Kyoya thanks his mom and promises he’ll come to visit more; Reika apologizes to Erika for badmouthing Kyoya, and Erika gets some cute pictures of a young Kyoya having his snowman kicked over by Reika.

Erika wants to make snowmen with Kyoya when it gets cold, and he considers if he should be the one doing the destroying this time. Erika is fine with that, but she’ll just build more snowmen, bigger and stronger!

Erika tries to distribute those pictures to her friends, but is stopped and taken aside by Kyoya, who leads her to the roof deletes her pictures, and leans in for a kiss, telling her in his suavest voice that why worry about pics when the real things right in front of her?

As Ayumi remarks to Nozomi, Erika and Kyoya sometimes have a funny way of communicating and expressing their love for each other outwardly, but it works for them. Just like this show worked for me!

I believe for the first time on Cross Ange, we get an Ominous Bigwig Conference, held in a pleasant holo-environment. which shows that Julio, whose name Misurugi is now synonymous with ‘criminal’, is very far down on the food chain. In fact, all the various leaders seem to defer to the apparently brilliant mind of one Embryo, a bishounen and dandy who proposes three options for humanity: surrender to DRAGON (unthinkable); wipe out DRAGON (impossible)…or scrap the world as it currently is and start over.

Tusk bugged this meeting, and relays their decision to Jill. She reorganizes the surviving mail pilots into new troops, putting a released Hilda in charge and throwing Salia in the brig for insubordination. She wants the girls on full battle alert; but she’s not so much concerned with more DRAGON attacks as imminent action by her superiors, in service of the ‘world-rebuilding’ decision that was made.

Before Ange jumps to and mans her bird, Ange wants answers, and Jill promised to give them. Jill insists they talk in the bath, since the revealing of secrets requires ‘total exposure.’ Call it ‘Q&A with T&A’.

Jill starts at the almost folktale-sounding beginning, in which a ‘god’ (Embryo) found a way to end war and suffering by engineering the ability to use mana in humans. When non-mana infant girls were born, the myth that these girls were dangerous society-rejecting monsters was propagated, in order to give the rest of humanity a common group to hate and discriminate against. But along with Norma girls, there was a faction of ‘old-fashioned’ humans who rejected mana (Tusk’s fam), and they joined forces in a rebellion.

The rebellion continues to this day, mostly quietly (though Tusk’s Ange-rescuing stunt was pretty high profile). But back then storming the palace netted them a ragnamail, prototype to paramail. That mail was Villkiss, but no one could pilot it until a Norma of royal blood appeared: Princess Elektra Maria von [German name]. But even she ended up failing; losing her right arm and her ring.

Ange mentions this is all well and good though she’s not ready to join “Libertus” movement yet, if ever, because she kinda likes her life. She also thanks Jill, whom she now knows was once a princess like her, for showing her what a stuck-up spoiled brat she was. Of course, Ange is still a brat, but whatever.

She also asks: What about the DRAGONs? On queue, Vivian wakes up and her hammock snaps under her weight. She lumbers about the barracks, wondering why she feels so big and bulky (we initially only see her POV, not her body). Then Vivi catches a glimpse of herself in the mirror: She’s a DRAGON. How very Kafkaesque. When Emma and the bridge staff see her, they scream… but she screams too. It’s good to have a sense of humor about such things.

DRAGON-Vivi escapes to the sky, and hums Ange’s song until Ange sings back; the song transforms Vivi back into human form, where she’s sedated and taken away by Maggie, who I’m sure already knew about this, having been the former Arzenal commander. But Ange connects the dots, then runs to the giant pit of DRAGON corpses Jasmine is about to set ablaze. 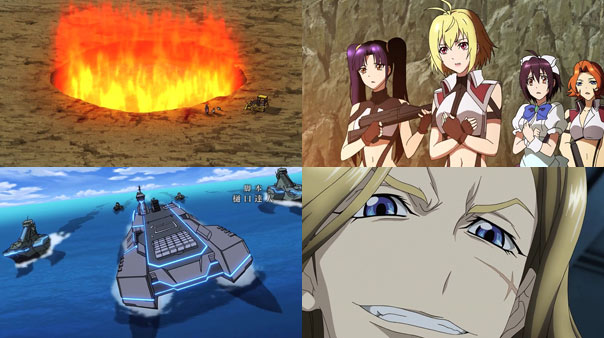 Ange’s comrades accompany her to the burning pile, in which they find human bodies amongst the DRAGON. So yeah, DRAGONs are people too, man…including the DRAGON Ange savagely beat to death, and all the others she’s wasted in the air. Suddenly Ange’s contentment with her life of killing DRAGONS and making money isn’t so easy. Furthermore, ex-brother Julio (wearing a scar from Ange’s attack) is coming for her…for all of them.

There were times this felt like a long chore of an infodump, but in the end I don’t think I absorbed too many answers, but rather just enough to pique my interest for the second half of the show. More questions obviously remain. And the little Vivian reveal / action piece was as adorable as it was significant to the plot. Ange thought she could live a simpler life in Arzenal, but she’s still a princess with a right arm and a ring. In this world, that means something.