As Ryouko surveys Takahashi from a high vantage point, you get the sense she senses something’s up. So when Yuki turns out to be absolutely right about there being a big government conspiracy (though people always sound crazy when they say that) and Kurihara has the Science Club and Momo arrested, Ryouko doesn’t stand idly by. 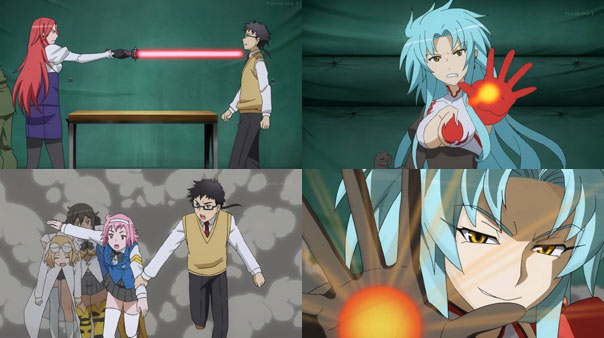 Kurihara puts a lightsaber to Tenchi’s throat, insisting she’s done with his games, but Ryouko busts in and uses her diversionary magic to allow Tenchi to escape with the girls.

Meanwhile, the GP Commander in charge of the operation to extract the “singularity points” finally zeroes in on Washuu, as the warhead is less than 45 minutes from reaching its target. But Washuu isn’t concerned…that is, with anything other than the fact these GP jokers are on her turf. Time and Space are her ‘playground’, and she won’t have interlopers. So what’s she got up her sleeves? 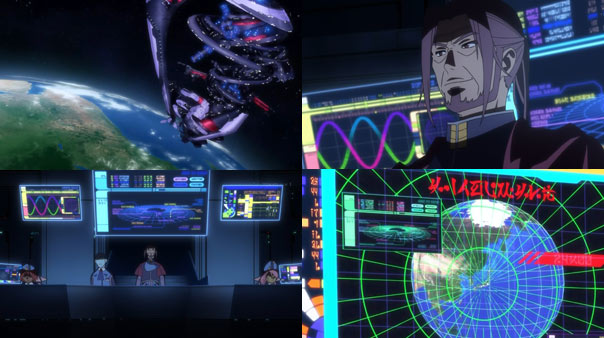 Half of this episode is spent aboard the Galaxy Police flagship now in orbit around earth, which has come to arrest the “singularity points” (Momo, Beni, and Washuu) before the “dimensional deficiency” they’re causing rises to catastrophic levels and the entire universe implodes. Are these stakes high enough for ya?!

There’s a great Star Trek-like feel to these space proceedings, helped not just by the barely-coherent technobabble, but by the prominent presence of okudagrams, which, to the non-Trekkie crowd, are cost-effective yet sleek and futuristic displays invented by technical adviser, scenic artist, and Japanese-American Michael Okuda.

The going-over of the mission is also a clever way to name-drop the show’s sponsor, Takahashi, Okayama, I believe for the first time. 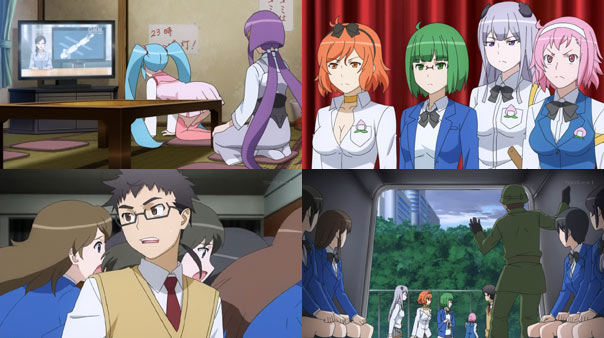 Okayama is where the GP is headed, and in cooperation with the government, has created an entire cover story for the operation: a old Russian space station’s orbit decaying. The debate and election are cancelled and the school is evacuated by what look like JSDF troops but are really GP officers in disguise.

The student council stops being a counter-scheming squad and fulfills their actual duty as student authorities. But when the last people besides them who have yet to evacuate are the Science Club of Rui, Yuki and Beni, Momo and Tenchi go after them…just as the GP launches a space-time fluctuation warhead. And those, my friend, are not something to be trifled with. I guess?

ABP is a little gem of a show that doesn’t quite make it into my book of best-ever anime. However, it remains the most consistent and (consistently excellent) show of the season.

This week is no exception and gave us a text-book perfect final push before next week’s conclusion. No time was wasted, the characters we love and know double their efforts, and a final kink blocks their path to victory.

The Summary: Kanie-kun’s final play is to invite a real-world soccer team to use the abandoned stadium on the final day of the season. It’s a near guaranteed 50,000 bump to the park’s guests counter and, with the help of some magic and mole people, it’s well within their grasp to get it done.

The lines are long, the guests are constant and, exhausted or not, the cast pounds through show after show. But, as the last bus of soccer fans walks through the gates, the park is short a few hundred of their goal. With three hours to go, it’s panic time! 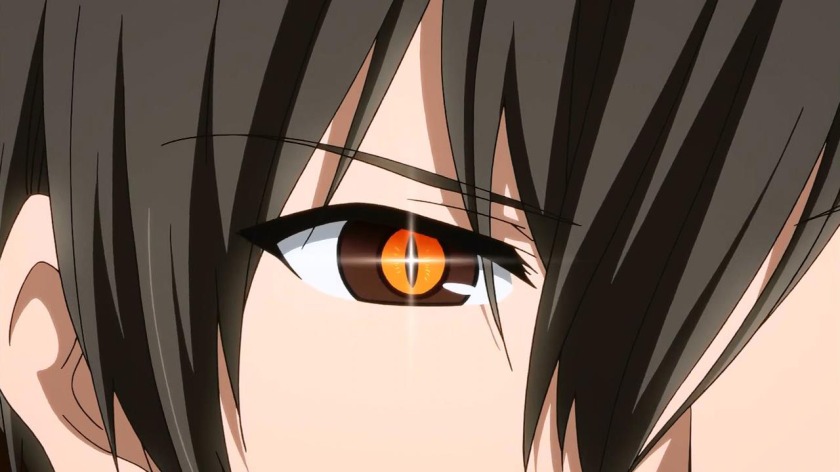 The Good – while Kanie-kun’s psychic power has gone a bit under utilized this season, I appreciate that it didn’t get over used either and this week uses it just enough to bend the rules in the park’s favor.

I also appreciated that 500,000 guests may not be practical for the park even at the best of times. Sweat by the bucket and fatigue aside, the high volume of guests bring with them long and slow moving lines. Amagi just doesn’t have enough content for that many people all at the same time. 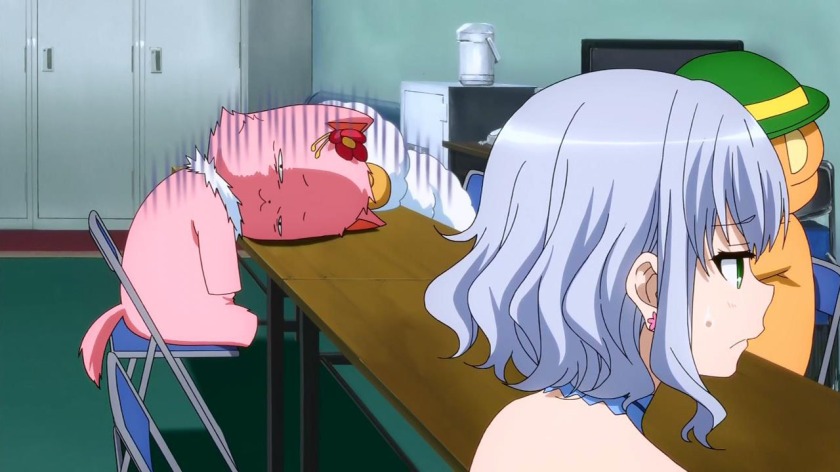 However, the single best element of the episode was the closing, where the cast is so close yet we have no idea (and they have no idea) how the gap will get closed. This is exactly what the lead up to a finally needs.

No new threats from left field, no distractions, just hard work from your cast and the thrill of seeing how they defeat the long challenge they’ve faced all season. 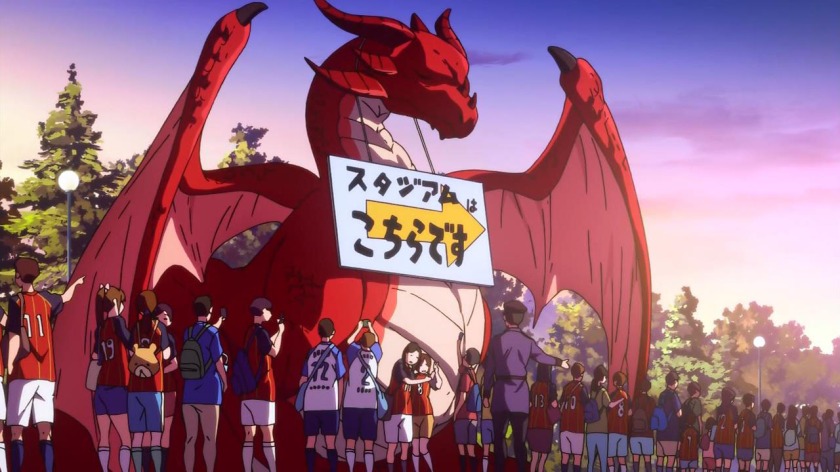 The not as goods – I have no real gripes this week. Rather, season-long issues. I remain …tepid?… about Latifah. She’s not a very interesting character and I think the show runners know this. (since they haven’t given her all that much screen time, relatively speaking)

Likewise, it’s been weeks since we’ve seen the dream-girl-trio. They were so well integrated for the two episodes immediately after their mid-season introduction but now? If they turn into a fix-all at the end, it will feel too hand-wavy and if they don’t appear at all? Well… then why were they introduced in the first place?

The Verdict – Another 9. Honestly, if you liked what this show has done leading up to now, you will like what it did here. It’s ramped up the tension, without losing its focus.

It remains to be seen if it can pull it all off in the finale. I’m confident it can — even confident that it may finally land a perfect 10 but, there’s always a potential for surprise… in the other direction!