Raraiya Monday is upset about the G-Self being saddled with an Assault Pack, ostensibly because she doesn’t want the G used for battle…which begs the question, what should it be used for? Was was she up to in it? When will she remember? Maybe sooner than I think; maybe not.

In any case, hitting her with a slingshot-propelled sneeze bomb? I like how Noredo thinks! If only her character had a purpose beyond tagging along beside Bellri and Rara-sitting.

Meanwhile, Klim, who everyone calls “Genius Klim” this week despite the fact he is not a genius (maybe it’s an inside joke?), has an audacious plan to occupy the Sankt Porto, the highest nut of Capital Tower, holiest site of CU Cordism, and the distribution center for all photon batteries. His reason is, for once, pretty simple: he, and by extension America, wants a piece of the action. 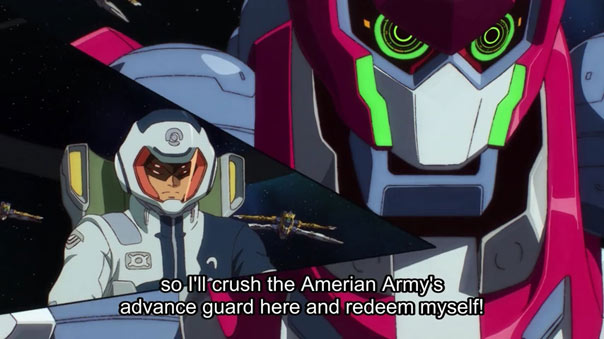 No you won’t. They’re way, way ahead of you, strategically speaking. You’re just going to fight another pointless battle and retreat, like you always do, because you’re a dreadful disappointment of a nemesis, yes you are! 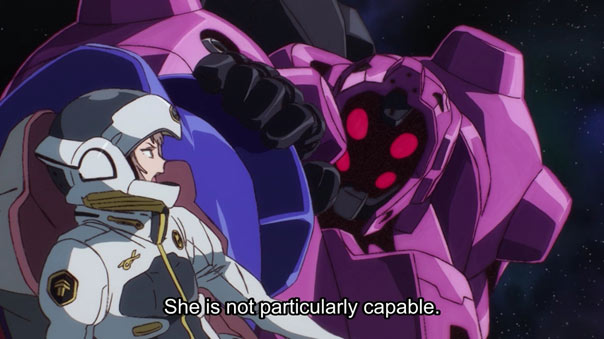 Klim is talking rather insensitively about Aida here, and while I can’t say he’s wrong, he could say the same of Mask. Klim himself is not particularly capable either, but at least he’s good and loud and cocky!

Ummm…not so sure about that, Bunny Lady: there is this thing called anti-aircraft warfare. I’m sure there is a SPACE version of it.

But you have let them, and continue to let them! And why are you spinning around like that? Are you remotely serious about anything?

Okay. Now this was kind of out of left field. Sankt Porto is, I suppose, a holy religious site that many on Earth believe will curse you if you try to enter. But Bellri’s outrage seems so out of left field. I mean, didn’t he know there was going to be a battle around the very place where they were headed? There’s always a battle!

Even more confusing is AIda’s reaction to Bell’s reaction. She acts as if she forgot he was super-sensitive about fighting near Sankt Porto. But she didn’t forget, because that was never a thing. Bell is just making up character traits as he goes along! And what’s with the persistent lack of romantic development?

I like this guy. I’ll bet he has to refocus the captain’s attention all the time like this. The captain’s probably writing an anime blog or something. These guys are such amateurs! 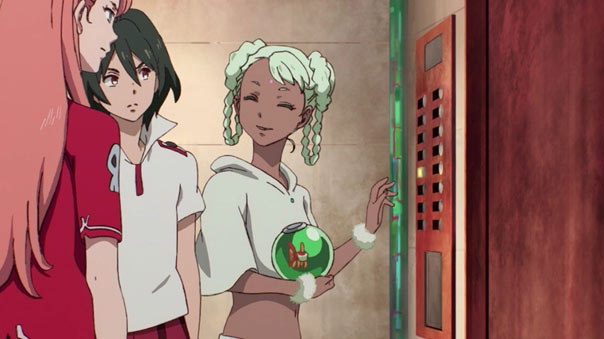 Wait…does she know where she’s going?

Oh wow look: another force of nincompoops! At least their fleet and gridlike moon development looks pretty cool. Here is the long-sought ‘threat from space’, which is really a threat from the moon. Maybe this is where Raraiya is from? Could they give her a pill or something so that she can be a cohesive person? Please?

I’m probably being overoptimistic; these are the bad guys, and it’s likely both Ameria and Capital will team up to fight them. And by ‘fight’ I mean more engage-and-retreats of dubious effect using newly-developed, oddly-named mobile suits and accessories that come out of nowhere. Looking forward to it!