Tachikawa was a combination of stupid and heroic when she confronted Shimada Hideo alone last week, but the universe isn’t ready to snuff out her candle yet, as she trip-dodges his first blow and tosses the nearest thing at hand — a bottle of paint thinner — that just so happens to give the monster nasty burns and render him unable to morph. Hey, who said fine art is useless!

That same universe must have determined that it had tortured Shinichi and Satomi enough for the time being, as Shimada’s rampage proves the perfect opportunity for Shinichi to not only play the hero, but mend fences with his sweetheart. Shinichi’s desire to get rid of Shimada himself is another case of his human desire for revenge — combined with the knowledge he has the ability to Do Something — overpowering Migi’s cold logic. 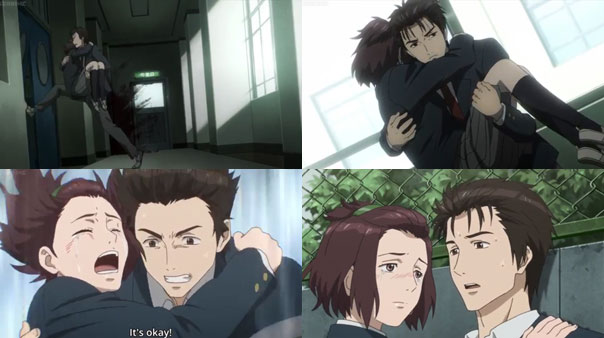 The ep gives Shinichi and me one last shock when we see a corpse with hair similar to Satomi’s in the hall, but it’s not her. In a vicious beat of dark humor, Shinichi repeats Satomi’s line of “I mistook you for someone else.” The other two students wig out and run right into their deaths, but Shinichi goes into full Get Hitomi To Safety Mode, and damn the consequences of the abilities he exposes.

Things really escalated fast for Shimada, who was probably going to try to keep the experiment going as long as he could, but the universe wasn’t having it, and in the end he resorted to his killer instincts. A firing squad of pea-shooting cops riddle him with holes before he kills them all. Migi wants Shinichi to leave it to the cops, who will eventually bring something of a larger caliber to bear, but feeling responsible for the Shimada mess to begin with, Shinichi insists on ending him personally. 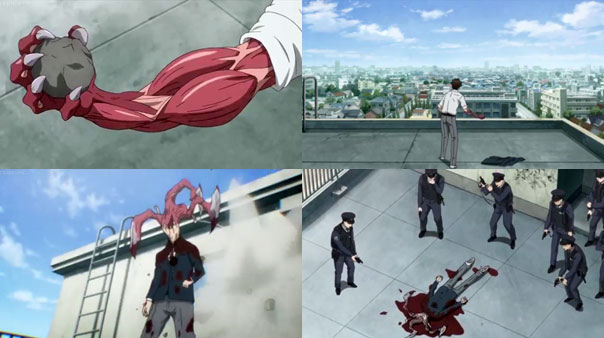 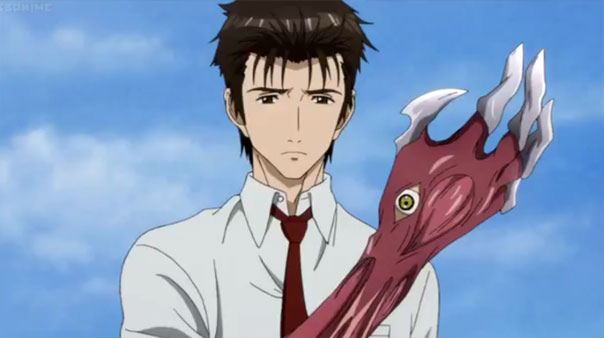 He does so…with BASEBALL. The most violent and deadly sport in human history — if a few rules were tweaked a bit, that is. Conceding to Shinichi’s wishes, Migi makes sure this is done right, giving him an awesome muscle monster arm to nail Shimada mortally through the heart from over 300m away.

The final butcher’s bill? 17 deaths, including students, faculty, and police. But because everyone who saw Shimada in Battle Formation is either among those 17 or scarred from the trauma of the situation, the police and media keep the incident under wraps.

In a big room with a big desk (and a Big Board!), Professor Yui cheerfully briefs the assembled authorities on the nature of the parasites, which he calls “sentient muscle”, and how to detect them: By plucking a hair from the one you suspect. Of course, that assumes it will let you live long enough to pluck the hair and do something about it, which is assuming a lot.

Still, I guess it’s better than nothing. After a few days, school starts back up (presumably after all the blood was mopped up) and Shinichi runs into a cautious but cordial Murano, who apologizes for not responding to his texts, but thanks him profusely for saving her.

Shinichi suggests they not dwell on the horrors of the past, and when he does, he doesn’t just mean forgetting about the harrowing bloody experience Satomi just went through, nor the fact he bounded around around like a superhero while she was in his arms. No, he also wants her to forget about all the awful exchanges they had prior to Shimada going postal.

Satomi seems receptive to that arrangement, and just like that, they’re incredibly back on good terms. Just because things went pretty well for Shinichi this week doesn’t mean the trend will continue. But at this point in the show’s 24-episode run, it was nice to see a glimmer of hope that things will turn out okay return, even if that turns out not to be the case at all.

One thought on “Kiseijuu: Sei no Kakuritsu – 10”