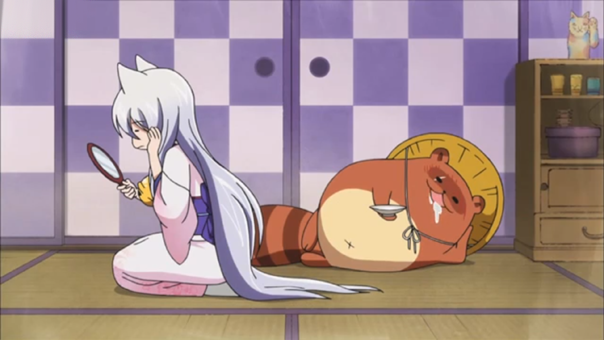 Gugure! Kokkuri-san picks up more or less where it left off last week. Kokkuri-chan is a woman, Shigaraki is head over heels drunk in lust with her, and no one else really cares.

I probably shouldn’t be so surprised that Gugure! Kokkuri-san carried this theme over from last week. This show has been all about its consistent, evolving, development driven plot after all. However, for some reason, I just expected Ono to be back voicing a male Mister Fox, with no real explanation. 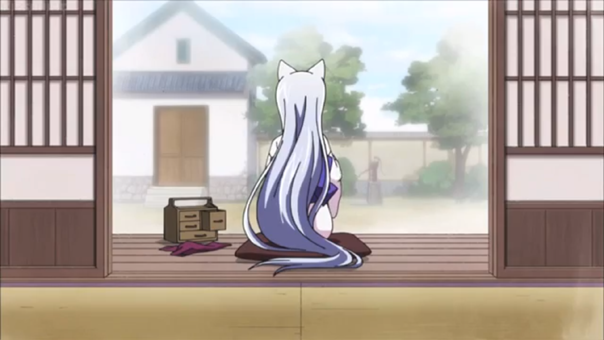 I couldn’t find who voiced Kokkuri-chan, but the voice sounded vaguely like Club President Miou from Sabagebu!, which I’m very okay with. Whoever it was, she captured Kokkuri-chan’s slightly timid, flustered voice very well, which worked well and really made me empathize with the character. (YES PRESTON I HAVE EMPATHY!)

I guess I would have been more impressed if the voice was done by Ono, or the show runners had found someone who could capture an Ono in female tones. Maybe I’m asking for too much but Ono has a very specific pentameter and a sort of dryness to his pallet that is very specific. (It’s almost like he has a perpetual summer cold). 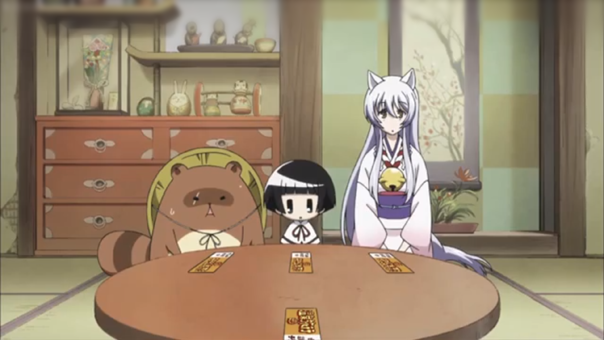 Understandably, Kokkuri is not especially interested in staying a woman. Knowing this, and knowing he can exploit the situation, Shigaraki wins some tickets to a hot spring in a town that is rumored to have a curse-breaking-hot spring.

Kohina implies that Shigaraki spent almost all his allowance on the lottery in order to win the tickets. So it seems like Shigaraki may be doing this as much because he really is a friend to Kokkuri-san as he is a lecher. He did save Kohina from the spirit and get a nasty scar after all…but I’m not really sure. Shigaraki’s pretty lusty and it’s a perfect setup for some ogling and heavy petting. 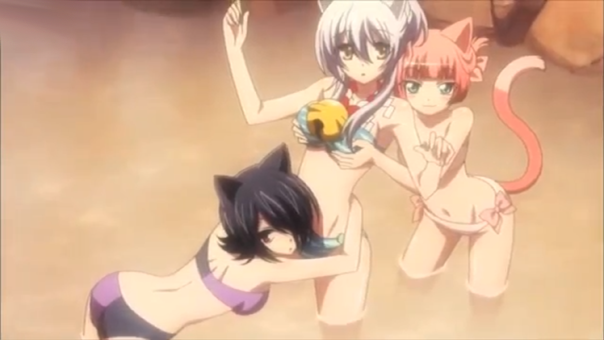 So it’s going to be a hot spring episode, which I guess makes sense for the middle season, even if it does feel a bit out of left field. We get plenty of the things you’d expect: well drawn bodies, skin, decent angles, conventional girl-on-girl boob feeling and peeping-tom jokes.

It’s cliché but harmless by most standards. In fact, I’m almost willing to give the show extra credit for playing with the conventions: the girls are wearing Bikini’s because they know Shigaraki will peep, by girls I actually mean mature Women, and we can’t forget that two of them are basically male in female form.

The whole thing is reminiscent of 4Chan dare to fap games… which I’m not going to explain in any greater detail than that :( 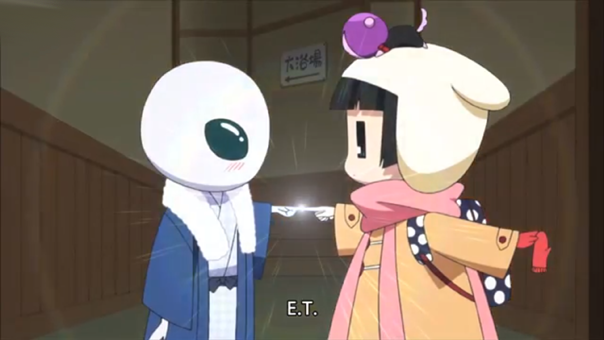 On the topic of unexplained, Yomomoto the alien and Tama the cat god are both in this episode because why not? When you have a big cast of one-off characters, making fun of their continued reappearance without context can be a joke in and of itself. Almost.

To be fair, I did enjoy Kohina, Inugami and Kokkuri’s conversation after running into Yomomoto in the hall. There’s something honestly funny about the characters not knowing which one of them is supposed to be friends with the alien. Everyone assumed it was Kohina, since she’s in his class, but she insists the alien likes Kokkuri… who doesn’t really like him back. 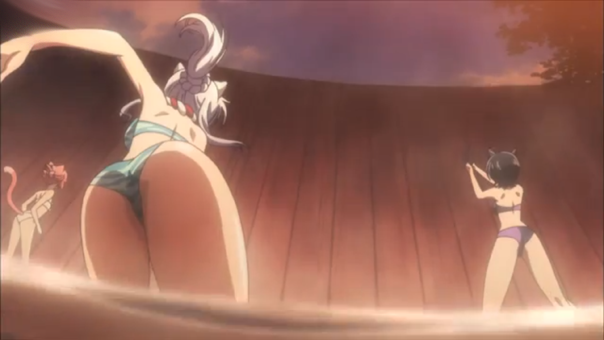 It’s cute and works well enough. Certainly Yomomoto works better than Tama being there. Tama doesn’t even have jokes to tell or to be told about or anything. She’s just there for a bath, to fight with Inugami once, and provide a pair of legs and boobs.

As for the primary lot and character developments? In between fine meals and baths Shigaraki… takes Kokkuri-chan to more baths. They play a carnival style shooting game and win prizes and have a bit of fun with each other but nothing brings Kokkuri closer to being male again, which is obviously the point.

That’s not really a complaint — these characters have good chemistry. Kokkuri is so feminine to begin with, and all his/her demands to be self reliant and stand offish and vulnerability just entice Shigaraki more. 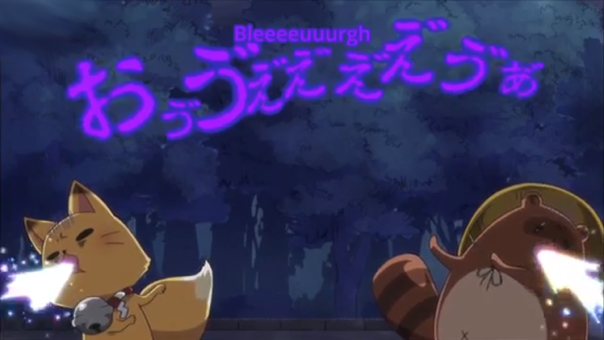 The best moment shows us that Kokkuri is so much smaller than he/she’s used to, he/she can’t even carry the bags of prizes they won at the shooting range. However he won’t let Shigaraki carry them for him. So Shigaraki picks Kokkuri up instead.

Then they kiss and turn back into men.

Without that resolve, which deliciously pokes fun at true love’s kiss as a convention, it would have been decent but typical. With the resolve, and the narration that this brutal resolve was the intent of Kohina’s ancestors, who appear to be a bunch of malicious prankster jerks, I was sold. 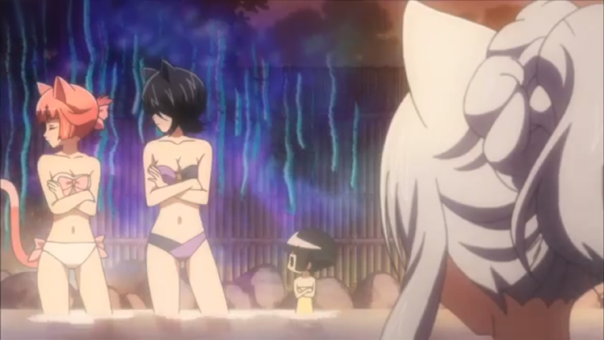 So, basically, this week’s entire joke structure revolves around Kokkuri-san already being a woman. In fact, Kokkuri notes that he stopped transforming into a woman ages ago even though he loves house work, cooking, and skin care products because men couldn’t leave him alone.

I suppose everyone’s response to him as a her is as cliché (or at least as predictable) as it was in his other gender. Still, I can’t help but agree with Kohina-chan. I’d find Kokkuri-san more interesting as an actual woman…