Note: I have not read the manga, so I have no idea how the events of this episode or the episodes to come will be adapted. It’s all totally new to me.

Tatsumi is in the hands of the enemy. He’s not just alive so that the Empire can make a example of him in a highly public execution. He’s also live bait, in the off-chance Night Raid is foolish enough to attempt a rescue. Of course, they are: Mine doesn’t care if its a trap; she’s going to save her love. Akame decides to come along, so their chances will be better. Leone also volunteers: she scouted and recruited him; he can’t be dying before her. Finally, Najenda states they can’t let a public execution tank rebel morale at this crucial juncture.

Bottom line, the ladies aren’t going to sit back and let Tatsumi get executed. They all love the shaggy-haired little bastard too much, albeit in very different ways, and no one more deeply than Mine.

Tatsumi, meanwhile, is fully prepared to die, knowing the remaining members of Night Raid got away with their lives. He doesn’t want to be saved, lest they throw those lives away. In this state, it’s understandable if he may not quite grasp just how much Esdeath is exerting every last morsel of her authority and standing in the empire…to save the life he’s willing to give away.

As the embrace they share makes clear, Esdeath’s love for him is real, and strong. So strong, she isn’t even asking him to betray his friends, only hang back and stay close to her. Part of me wanted Tatsumi to take her offer, but he can’t, and not just because he loves another, but because as beautiful and capable of kindness as Esdeath is, he can’t overlook the crimes she’s committed and continues to commit in service of an empire that’s taken everything from him.

Yet even when Tatsumi categorically refuses and pushes her away, it’s not as if she can stop loving him. She can only accept that the only course now is to kill him herself.

When Wave hears Esdeath will be killing the man she loves, he’s greatly troubled and doesn’t understand…but Kurome understands. As Esdeath hasn’t stopped loving Tatsumi, she hasn’t stopped loving her sister, which is precisely why if Akame is going to be killed, better for Kurome to kill her. Kurome’s problem is, nature may step in and kill her first, as clearly shown when she pulls dead hair from her head.

My eyes welled up quite a bit at this scene, which I’m sure was the episode’s intent. And this was just a side scene with ‘bad guys’; the only scene with these two in the episode. But this serves as a good prologue for the final Akame-Kurome fight we know is coming.

Did I mention this was a particularly beautiful episode of Akame ga Kill!? It was; it was staged and lit like a movie, an epic movie. The shot above is special. The remaining members of Night Raid, gathered in the sitting room of the late Lubbock’s home, the green upholstery suggesting he’s there to, just not in person. This is the last time this particular group of Night Raid members will ever be in the same room. Everything will change from this point on.

One of my favorite live-action films is Gladiator, in part because no story about Rome before or since quite captured the slightly weathered but still strong and seemingly invincible power, grandeur, and glory that was the Roman Empire.

The descent through wispy clouds into the Imperial capital’s arena and the theatricality of a grand final battle seems inspired by similar scenes in that film. Only this is an execution, not a rigged duel.

I must say, the little Emperor gives a rousing speech, without the use of cue cards, that pretty comprehensively demonstrates how easy it is to twist words around to make Night Raid the enemy. They are killers, after all, and they are trying to throw the Empire into chaos, though that’s so they can root out its corruption and evil. 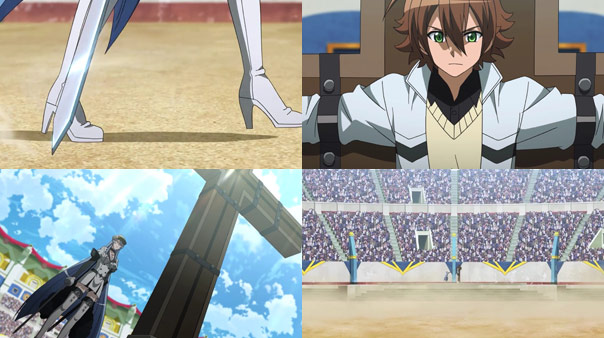 Goosebumps gather as Esdeath draws near to the cross where Tatsumi hangs restrained. Even here, Esdeath prepares to deliver a blow that will look like it kills Tatsumi to the masses, but doesn’t actually kill him; still holding out hope Tatsumi will come to his senses so she won’t have to go through with it.

Tatsumi refuses, but before Esdeath can kill him, Mine arrives and fires a shot she has to dodge, followed by Leone, Najenda, and Susanoo on the big flying manta ray. This would be a terrific specacle to watch at the arena if the participants’ attacks didn’t cause widespread collateral damage, so the spectators flee, and we’ve got ourselves a battle some people won’t be walking away from.

Najenda and Susanoo take on Esdeath, which, duh, while the hard-hitting Leone backs up Mine in her fight with Budou. Mine is confident both her love for Tatsumi and the intense pinches Budou will put her in will make Pumpkin’s shots strong enough to defeat him.

She’s proven right, but in the process, the tiny frail Mine gets tossed around and beaten up quite a bit, and her final shot takes a lot out of her, and more to the point, she may well have known it would take too much out of her, but she had no other choice. Budou is defeated, but we can’t score one for Night Raid, now or later.

Meanwhile, Najenda’s battle with Esdeath is everything we hoped for from these two powerhouses. Najenda leans heavily on her human-type Arms while Esdeath relies on the ice demon within her. Both use their trump cards, but while Esdeath’s time freeze is a once-a-day affair, Najenda’s ability at this point in her life is one-time-only and unrecoverable. She puts much of her remaining life force into healing Susanoo, knowing she can’t defeat Esdeath but can keep her busy long enough for Tatsumi, Mine, and Leone to escape.

And yes, Tatsumi gets away with his beloved Mine, scolding her for coming after him as he rushes out of the city at top speed. But Mine is not in a good way at all, and tells him to stop and put her down, not because she’s embarrassed — we’re light years away from that childishness now — but because she doesn’t have long, and she has something to say.

And this…this just isn’t fair. After all that fighting, after she defeated Seryu and Budou, the toughest badasses anyone from Night Raid has ever taken out, after Tatsumi just manages to catch her before she falls to her death…she’s simply at the end of her never-sturdy-to-begin-with body’s rope. But there’s still time for her to tell Tatsumi she loves him and she’s glad she fell for him, and that they’re on the winning side, and always were, and then share their first and last kiss.

In a show that’s become very good at farewell scenes, this one really knocked it out of the park, and is all the better due to its simplicity inevitability, and raw emotion. I really really wanted Tatsumi and Mine to come out of this and live a happy, loving life together, to make a family. I wanted this so much that I ignored just how ridiculously unlikely the chance of that happening really was. R.I.P. Mine.

This was the most epic, thrilling, heartbreaking episode of Akame ga Kill! yet, but we’re not done yet. Mine can no longer create the fair, peaceful world she fought for all her life, which led to her meeting and falling for Tatsumi, who wants the same thing. He, Akame, and Leone have three more episodes to make it happen.

Now if you’ll excuse me, I’m going to go sob in the dark.