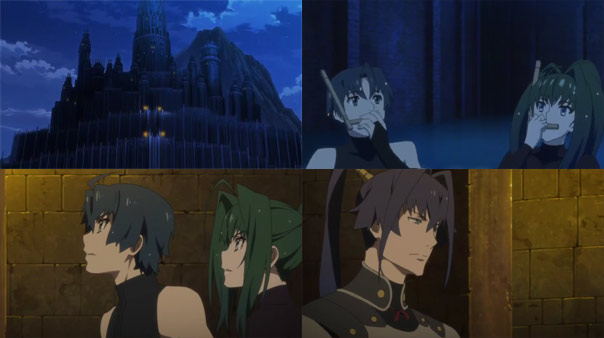 This episode had a workmanlike quality to it, like the buildup to the final act of a JRPG-style fantasy/adventure story that it is. One does not simply skip to the final boss (whom I presume is Hartgen) without first carving through a considerable number of dungeon grunts.

That being said, Tooru and Akari actually do try to skip ahead, but encounter the mini-boss Shin, someone they’re not prepared to fight just yet. In a refreshing twist on the “students must face their mentor” trope, they don’t particularly care about having to fight him eventually, because they’re saboteurs, and are mentally prepared to fight former friends or allies if they’re working under different clients…that’s what the job requires.

It’s also confirmed what King Hartgen is after: basically, he’s tired of the tedious peace, and regrets ever killing Gaz. He wants to return the continent to a state of war where he can have a Purpose again. One could say “Hey man, you do have a purpose…preserving the peace you fought for!” but he’s a warrior first and foremost, and a warrior needs war.

To that end, he has gathered tens of thousands of like-minded warriors without a war to his principality to fight in his tournament. Perhaps the competition is to thin the herd and net him only the fiercest fighters for his army of continental conquest, but there seems to be more to it than that, and that has a lot to do with the fact three…no, two and-a-half Chaikas are among those assembled.

I will give Hartgen this: he already has the hearts of those he’s invited. Even though many if not most of them will fall in the course of the battle royale, they’re still gratified for the chance to prove themselves and do what they were born and trained to do. Back in his castle, Guy presents him with Gaz’s Fortune: Niva Lada, and we learn that the Black Chaika twins have a third Chaika sister who seems to have more power than them. She instructs the guards to capture the Chaikas who have come, hoping to stage a little Chaika battle royale of her own parallel to the battle proper. 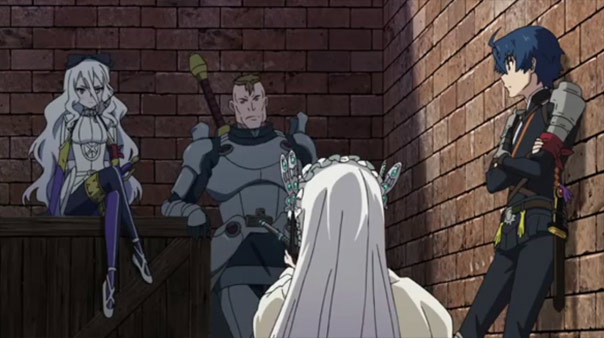 Inevitably, two of the rival parties were going to cross paths, and that turns out to be  Vivi/Nikolai and Chaika/Tooru. The former warns the latter that they’re going to be arrested when they’re done their business here, but for this brief scene the two groups are at a truce and exchange information. 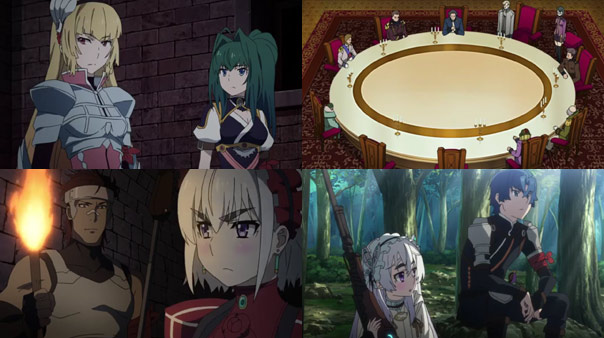 O HAI, Grown-up Fredrica! Haven’t seen her in a while; she’s pretty cool looking. She and Akari are responsible for finding a way to get to Hartgen’s share of remains and stealing them. But let’s be honest here: Fredrica’s true mission is not to get stabbed in the head this time!

As the battle goes on, the other Six-Nation rulers squabble over how to proceed. One faction is eager to fall right into Hartgen’s trap and start a war so he doesn’t have to, but cooler heads deferring to Gillette Squad’s findings prevail for the time being. Frankly, I don’t know how a war is going to be prevented at this point…but that’s what the last three episodes are for!

One thought on “Hitsugi no Chaika: Avenging Battle – 07”