Denki-Gai no Honya-san 7 is a ‘hot spring’ (onsen) episode and, as you would imagine, that means we got skin, boob grabbing and some embarrassing moments. We also got some decent character development and a few inches of plot advancement.

Did DGnHs do anything interesting with this cliché of a clichéd setting or was it all just more fan service?

I’m not sure, in all honesty?

DGnHs is always knowingly funny and this week pinned that on Sensei and Hiotan, who’ve never been to hot springs before. DGnHs very aggressively shows that their expectations, based on manage and anime, are way off. So off that they end up happily running into a co-ed waiting area, totally naked.

Even though the facial expressions, the long pause, slow reverse zoom shot is hilarious AND is the source for the show’s best joke via a call-back later in the episode,  Director, Ex-chan, and Hiotan could’ve exposed their true romantic feelings for each other anywhere. 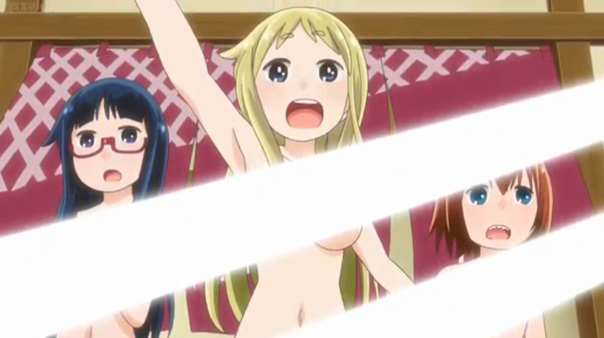 Likewise, Umi-kun and Sensei-chan’s romance goes nowhere, which is odd since Sensei received extensive screen time early in the episode. The result was… repetitive: She’s embarrassed and doesn’t know how to act feminine. We get it!

And yeah… yeah I’m trying to avoid talking about the “Now it’s time to feel your breasts” scene. I can’t think of a reason why that’s in there for anything other than fan service.

The best scene, and most representative of DGnHs’ knowing, genre-poking style, came at the end, when Hiotan ineffectively confronts director about his feelings for her. In it, he admits to not having seen her boobs very clearly, because of some very awkward lighting.

Hence, the very strange ‘light line’ that censored her boobs in the first place.

It’s clever, pokes fun at convention, Has lots of energy. (both characters are standing on the back room tables, they are so wrapped up in what they are saying)

But was it good?

Welllllll… a little more plot development would have been desirable. Additionally, ep 7 gave us some great laughs, it strangely didn’t give many.

So I can’t help but feel like this is exactly what it seems like it is: mid season ‘filler,’ to designed to give us just enough to hang on to the big relationship push, failure, and bounce back cycle that usually develops around episode 9.

I guess that’s what a hot spring episode is for. So its successful enough, which is good enough for me.