The Shiomi Happy Project is shaping up nicely. While Ikkei is present as a token second guy (and the less bookish, more enthusiastic of the two), let’s not kid ourselves: a harem is in the making. At various points Kyoutarou has what could be construed as flirtatious moments with Tsugumi, the newest member Suzuki Kana, and the “Song Princess” Misono Senri.

That last one seems to have some kind of Secret regarding The Past, one she and the school radio host Serizawa Miyu seem to share. As Tsugumi sets the club to work picking up trash on the school grounds to built trust with the student body, the finding of her tuning fork makes Senri the first direct recipient of the Happy Project’s assistance.

That’s if you don’t count the blonde, Suzuki Kana, who joins the club quickly and seems to fit right in. She seems to be withholding certain information about her circumstances; it could be, for instance, that her old cell phone didn’t break, but she didn’t have one to begin with until Kyoutarou helped her pick one. That, in turn, would mean Kakei, Tsugumi, Tamamo and Ikkei were her first contacts. She just had a lonely vibe about her.

Speaking of lonely, Kodachi Nagi is on the periphery of this episode, observing the growing club occupying what was once Kyoutarou’s Fortress of Solitude. While it’s pretty clear she’s at least partly responsible for bringing the various club members together (she means to get Senri to join too), when she’s interacting with them, it’s only to tell them to pipe down, which is clearly an act, because they wouldn’t be in there making noise if she hadn’t done…whatever she’s doing! 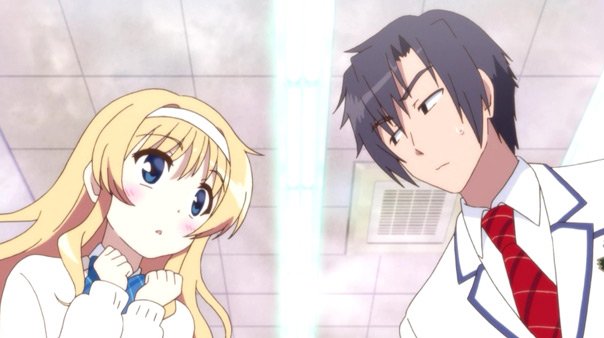 One of the side effects of agreeing to participate in Tsugumi’s Happy Project is that he’s becoming a lot more tolerable of things that aren’t books, like people and non-reading activities. He even volunteers to accompany Tsugumi to Senri’s house at night, concerned for her safety. And after seeing her wait outside the door, he finally decides to give her the key to the clubroom, and leave to make copies for everyone. 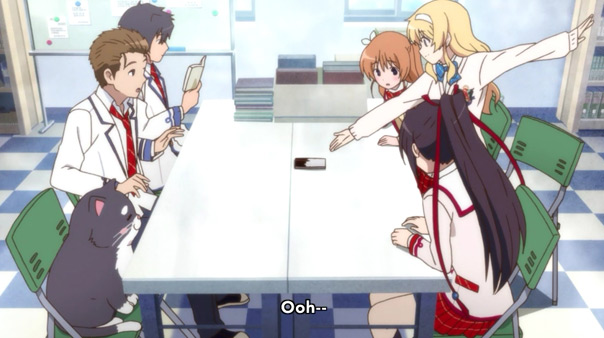 There’s a pleasant, understated earnestness about it, along with a warm, amiable energy. Kyoutarou is aware that conditions around him are shifting rapidly, but not for the worse, and he’s willing to go with the flow and see where Tsugumi’s light takes him.

One thought on “Daitoshokan no Hitsujikai – 02”