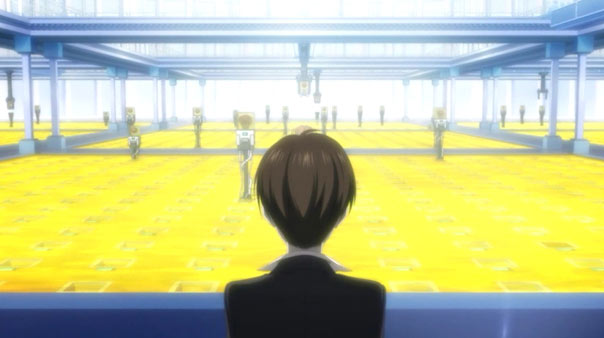 Note: I had planned to finish the first season of Psycho-Pass before the new one arrived, but I didn’t want to rush things…and procrastinated! -H.

Psycho-Pass has gotten noticeably talkier in the episodes leading up to what I can only imagine to be a mind-blowing finale, but when the talking being done (and the talkers themselves) are this compelling, I can hardly complain. This time, Akane’s own Dominator speaks to her. As I suspected, she’s firmly on Sybil’s radar, and they’ve decided to tell her the truth, in hopes it will motivated her to help them acquire Makishima. 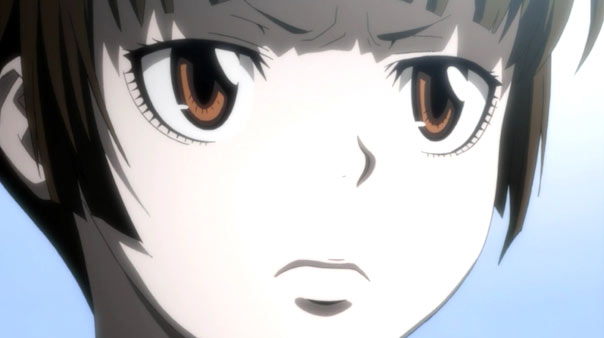 Action-wise, there’s not much to speak of here, at least early on: lots of standing around listening to the voice of Sybil, as Akane continually calls bullshit. We also have Akane having conversations in her head with Kagari, Makishima, and Yuki. By scanning her mind, Sybil believes Akane shares their desire to maintain social harmony, and the belief that society as it is would break down if Sybil were brought down.

These conversations serve to reinforce the kernal of the idea that first took root in her mind the first day she joined the MWPSB: that the system is not absolute as she thought. It is not perfect, which means it cannot claim absolute authority over society. Sybil basically expels what little regard she still had for it by revealing their true nature as puppet-masters. But because they can still decide whether Kogami lives or dies, she makes a deal with them.

Once that deal is made—with her pointing a Dominator at her chest and telling Sybil to make its damn move—it gave me every confidence that she’d hold up her end of the bargain, but it probably isn’t wise to take Sybil at its word. Her flashbacks also reminded us that unlike most of the population, her immense natural talent in many disciplines (or luck with tests as she calls it) gave her a choice they didn’t have.

In effect, that choice from a variety of futures afforded her a measure of free will. Sybil indeed cleared up a great many things for Akane, and it’s like a fire was lit beneath her. At the home of the murdered agricultural official, she breaks out her super-sleuth skills, channeling Kogami to Ginoza as she talks. Kogami is already at the granary where Makishima intents to poison the crops.

Akane showed us a lot this week, like just how much she’s grown and matured. I love how disappointed and disgusted she gets the more Sybil tells her. But it also confirmed to us that she’s far from the cold and emotionless automaton she feared she was, or that her clear hue would seem to indicate. Why else would she agree to giving Sybil exactly what they want, essentially serving as their pawn, for Kogami’s sake?