Still lots of characters and connections yet to be revealed, but no harm in getting started: 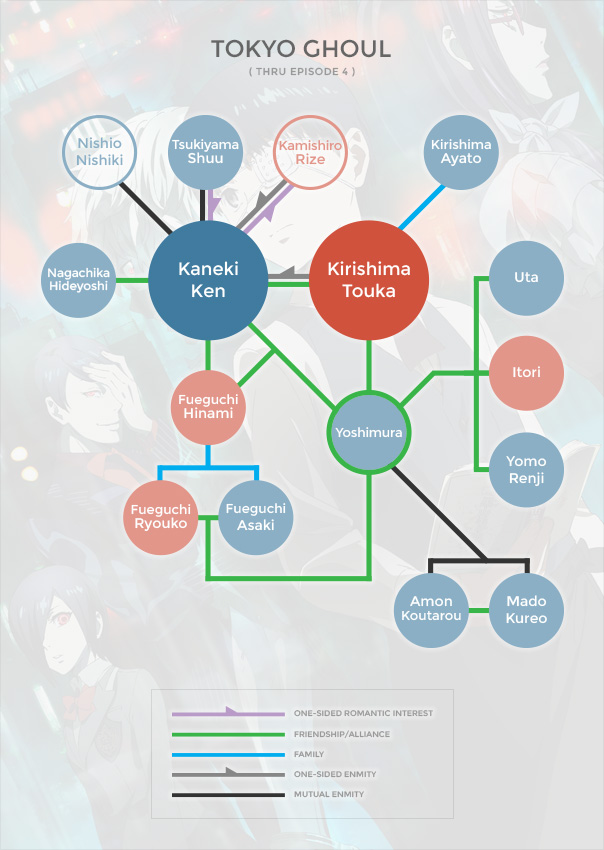 Just as I was complimenting MMR’s compact cast, this episode introduces three new characters, the girls of the disciplinary committee. It’s not as bad as all that, though; two of the three are little more than background, while the third, Inoue Sumiko, turns out to be a lot more interesting than the cliched imperious school busybody constantly adjusting her glasses.

Don’t get me wrong: she is bossy and domineering, at school at least (though I didn’t notice an excessive amount of glasses-straightening); quite possibly to the point of overstepping her official bounds with regards to confiscating and destroying contraband ero literature, of which Kouta is known school-wide as a prolific wheeler and dealer. But here’s the thing: she’s not being a heel simply for being a heel’s sake—this is personal for her.

Drawn far more straight, sturdy, and angular than the girls regarded as “hotties” in previous episodes, it’s made clear by several trips into Sumiko’s head that she harbors a deep resentment towards her peers, who never regarded her as a girl. None of the boys would even flip her skirt—once a source of pride, now fuel for her high school angst. But there was one boy who did flip her skirt, and isn’t shy about regarding her for being her: and that boy was Kouta.

That’s right: in school they’re arch-nemeses, but in the real world their mothers are friends. They go way back. It would seem they live close by. If their families were more traditional, they may even have been betrothed to be wed by now. It occurs that were Rurumo not in Kouta’s picture, Sumiko would be the primary female interest in his life. Kouta’s tawdry rep precludes them appearing to get along in school, but they seem to get along just fine on the outside. 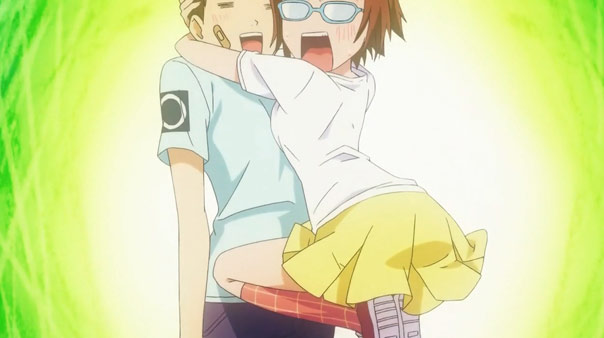 By “getting along” I mean Kouta can earnestly compliment Sumiko’s cute clothes when she delivers cake to his house; she can put on Rurumo’s pair of “Glasses of Misfortune” and cling to him when rats appear (it was frogs for Rurumo), and then he can chase her down the street during which she gets drenched by various water sources. She may call him a pervert, but he’s her pervert. As for Sumiko herself, she was a pleasant surprise.

This is the twenty-sixth monthly rundown since we started doing them, and July just happened to be our best month ever. For that we only have you, the readers, to thank. Which we do. Vociferously!

As for the rundown, we’ve decided to keep it simple with a nice, big colorful bar graph that visualizes our progress with the many shows we’re watching and compares our ratings to current MAL scores.

Give it a click to see the full-size version. And if you haven’t already you can also check out our four-part Summer 2014 Viewing Guide.

One quarter in, it’s been a very full but very good Summer, even though several shows have yet to truly take off. Individual thoughts below.

Hannah: The two shows at the top of my list (and the overall list, for that matter) are both awesome and compelling in different ways. The world of Zankyou no Terror is very much intact—minus a building or two—and deals with more realistic stakes, making it feel grittier and more immediate. And while there are explosions, it’s more a battle of minds—old and grizzled versus young and pissed off—and both sides have been wronged by society. We’re only three episodes in, but it has the unassailable whiff of prestige all over it.

Aldnoah.Zero is, on it’s surface, a much more black-and-white tale of advanced Martians beating up on their distant human cousins, but wisely chooses to put us on the ground, in the thick of the action, where ingenuity and resourcefulness battle brawn and arrogance. It’s doing a very nice job making the small victories of the band of high schoolers—supported by adults in the military—feel as plausible as they are satisfying. It also helps quite a bit that the protagonist is not the typical whiny twerp. He’s downright stoic.

Sword Art Online II is…just beginning. Being a huge fan of the last season but having endured some of its missteps, I am not opposed to it getting its ducks in a row before delving in. I’m in no rush. What I can say is that I like Sinon so far. I like her dual identities in the real and virtual world, I like that she’s voiced by Sawashiro Miyuki, and I like that her hair is my favorite color. I just hope she isn’t reduced to another damsel for Kirito to save. Please, show: let her save him; at least once!

A bit further down on that chart is my fourth show, Rail Wars!, but 7.50 is perfectly respectable. Rail Wars! is right up my alley in many ways, celebrating mass transit and the minutiae of trains and transit, which sound very dry on paper, but spicing it up with tight skirts, guns, martial arts, and other fun stuff, which sounds ridiculous. And yet it all works just fine. The red-haired firebrand of a female lead Aoi is a big reason why.

Zane: No show has given me more laughs per minute than Barakamon, which full of colorful, hilarious, and adorable characters of all stripes. The fish-out-of-water in the center of it all is all but powerless against the charms of the podunk island village where he’s been deposited, and where he attempts to wrestle his creative identity into submission. The premise, if mishandled, could easily enter the realm of hoakiness, but it isn’t being mishandled.

Not far from Barakamon is Gekkan Shoujo-Nozaki-kun, with its addictive brand of rapid-fire exchanges and satirical exploration of the shoujo genre. I will say that the girl’s personal romance story isn’t exactly progressing with any kind of alacrity, but in the meantime there’s plenty of fun to be had and poked at said genre. My only gripes thus far are a slightly over-sized cast and one episode’s worth of excessive violence towards a girl.

I’ve really enjoyed Hanayamata’s joie de vivre and attention to detail regarding the movements and gestures of its characters; a good approach in a show centered around a type of dance. There’s precious little actual dance in it, but I’m finding the other dance—that of a group of one becoming two, then three, than eventually five—just as entertaining.

Space Dandy 2 is…just like Space Dandy, which is just like a box of chocolates. If you like chocolate and aren’t allergic to anything, you’re going to enjoy most of the contents of that box. Sometimes one will stand out among the others as a particularly mind-bendingly delicious piece; sometimes there’ll be a dud. Its eclecticism remains more an asset than a liability.

Ao Haru Ride is my standard shoujo romance show of the season, and so far it’s doing its job well…we’re on board for the ride and like where it’s going. It’s very straightforward in the push-pull, love-me-hate-me dance of the central couple, but it’s wisely putting most of the focus on that couple rather than unduly scattering our attention. And my attention span sucks. Yes the characters can be a bit bug-eyed, but I honestly don’t mind.

Last and least on my list, though not by much, is Glasslip, which is juggling several little mini-dramas within its running time. The literal world isn’t ending for them the way it was in Nagi no Asukara, but that doesn’t make their personal problems any less weighty to them. We come on this long-time circle of friends during what could be their last Summer together. To put a twist on a common phrase from Game of Thrones: Autumn is Coming.

Preston: Curiously, the show I got into last currently tops my list, just as a very similar show in Hitsugi no Chaika did this past Spring. What can I say; I’m a sucker for action-adventure romps in fantasy worlds not too much unlike our own. Akame ga Kill! traverses many very well-tread roads, but traverses them with competence and confidence with a bit of spunk and a little glint in its eye. It’s not groundbreaking, but it’s quite stylish and a load of fun.

Majimoji Rurumo has avoided the pitfalls that sunk Witch Craft Works, namely shoving dozens of characters we don’t give a crap down our gullets or constantly fielding utterly incompetent villains. There’s also nice dissonance in the fact such a sweet romance is brewing as the protagonist’s life is literally being burnt away, one magic ticket at a time. The show also has a zany but not overly goofy visual style and a funky soundtrack to boot.

Sailor Moon Crystal delivered two very respectable episodes to us. The only problem is, it took a month for that to happen. Anticipation doesn’t so much build as I kind of forget about the show until it decides to show up again. This biweekly thing is highly irritating, but I’m not blaming the show, which is, as I’ve said, marches to the beat of a different drummer in more ways than just scheduling, and in a good way.

Ah, Tokyo Ghoul: not nearly as good as MAL thinks it is, but not bad, either. It suffers from a fairly insufferable protagonist supported by a far more likable supporting cast. If nothing else, it provides the darkness and goriness to counter the lighter, flowerier stuff I’m watching. I always strive for balance through contrasting media.

Finally, DRAMAtical Murder, a show chock-full of characters with extremely specific looks hanging around shooting the breeze, as increasingly strange/bad things happen around them. The only women are a snot-nosed little girl and an ox of a grandmother, which is kind of refreshing. But yeah, the OP and ED continue to write checks the show in between can’t quite cash.

(Franklin sounds off on his shows in the comments.)