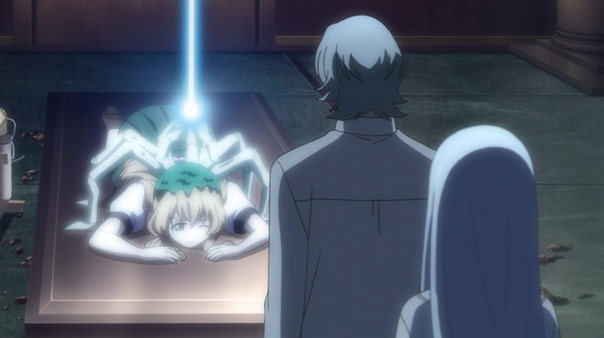 “Sometimes we fail to operate logically, and act on emotions. That’s why I despise humans.” – Ichijiku Chisato, Human

Chisato tried oh so very hard to operate logically his entire life, and if Mako could kill Ryouta and Neko all he had to do was recreate a Kotori-like vessel to restore his sister’s soul. But who is he kidding? Saving Rena was always an emotional crusade. I did not expect him to be a human shield for Mako when Hexenjagd made their appearence, but then again, neither did he. Ultimately, he was the very model of human he most despised: the kind who sacrificed his life for another; who couldn’t stand by and watch a defenseless Mako get gunned down.

His was one of many sacrifices made in the final episode of Bryhildr, in which bodies go down left and right in melty or bloody messes. First Neko and Kazumi knock Ryouta out and proceed to Chisato’s lair on their own. Then Kotori ends the extra terrestrial phenomenon taking place on her back by ejecting herself, quite possibly saving the world from resetting (while that might have been an interesting possibility, there was no time to explore it). In the process, Chisato’s sister Rena actually awakens, only to die again when Kotori melts. 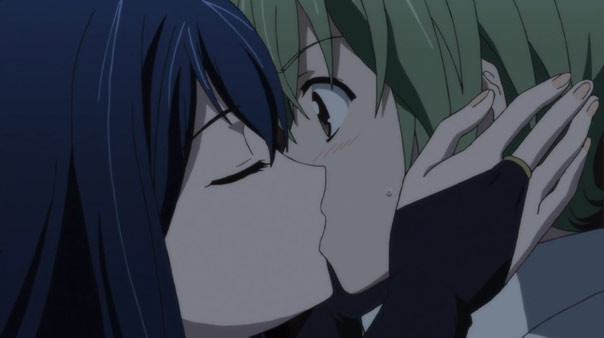 For a finale where serious shit needs to get down, the show didn’t forget its characters and why they do what they do. Realizing that in her present state of being cleaved in two by Mako, Kazumi can’t do anything other than tell Ryouta to press on in saving Neko. While the shot of Hatsuna healing up last week precluded any possibility of Kazumi dying, I was still moved by her “last moments”, in which she laments not having Ryouta’s babies and not losing her virginity before dying, but takes solace in the fact she at least fell in love.

Did Mako’s death rays take way too long to kill Ryouta and a surprisingly ambulatory Kana? Sure! But pacing aside, but I did like the fact Kana showed up, having given up the forcast ability she used to protect Neko when it came time to protect her with her physical body. Ultimately, none of this moved Mako into surrendering, and she just goes into a self-destructive fit of rage, summoning antimatter that Neko has to neutralize using her hidden powers. For one glorious minute Kuroneko was back, but after kissing Ryouta and telling him he’ll always love her, it’s back to business. She takes out Mako, but there’s a cost: her memories are reset once more.

But hey, she’s alive, as is Kana and Kazumi and Hatsuna, and Kogoro managed to make a breakthrough with the pills, so all’s pretty well that ends pretty well. With Kuroneko’s memory and Kotori being the only sacrifices that stick, I’d say Ryouta & Co. came out on top in the end. Kogoro’s interest in the drasils gave us pause, but that wasn’t a sure sign he’d pick up where Chisato left off, throwing the world into chaos again. Maybe he’ll operate logically and leave well enough alone, letting his nephew and his harem/family live in peace.