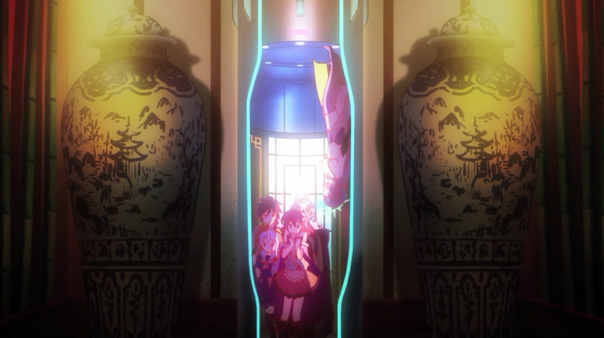 Last week revealed the means by which Sora and Shiro could study the Warbeasts in preparation for their challenge, and this week shows their strategy in motion, but there’s no in between. I think that was a very gutsy but shrewed decision. It’s been clear for some time now that this is a show that’s not so concerned with whether Blank will prevail, but how.

That the show can belt out an episode that remains entertaining throughout while withholding even that “how” is an accomplishment in and of itself. Because the fact of the matter is, we’re as stumped as the Warbeasts about what exactly Sora has planned. All we know is that he enters their embassy and entreats with the adorable Hatsuse Izuna (Sawashiro Miyuki in Full Chibi Mode) as a mere formality.

By forgoing the precise manner in which Sora aims to defeat the Warbeasts, the show is asking us to have faith and trust it will show us, and it’s earned that trust these last seven weeks. That doesn’t mean this episode is bereft of juicy logical deconstruction. Clearly, Sora has carefully studied the old king’s notes and devised an intricate plan. We only see the opening moves of that plan, but as I said, that’s sufficient to build up enticement.

Even in the way he informally invites himself to the embassy—using his smartphone’s camera zoom to locate Hatsuse’s gramps and gesture his intention to visit—provides Sora with ammunition to fuel his case that the Warbeasts aren’t as implacable as Imanity believes. He even proves that they can’t read minds, by acting in ways they’d surely have responded to if they truly could.

He also deduces that the Warbeasts have been defeating their adversaries with video games, a medium at which Blank excels. When he stakes the Imanity Race Piece against all of the Warbeasts’ territory, Dora thinks him mad, and many of his people protest. But neither he nor Shiro care what they think: they’re not going to lose at video games. 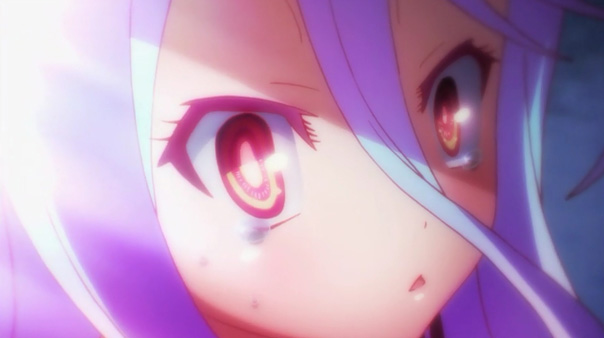 But even Shiro doesn’t see all of what Sora has planned when the episode’s transitions grow more distorted and Sora vanishes from her sight. Do you usually skip the ending sequence? If so, you missed the fact that Sora was totally erased from it; a very nice touch that raps against the fourth wall. In the cold close, Shiro is curled up in a fretful ball, and Dora has no idea who Sora is. I thought I knew, but he keeps surprising me.