This is a version of the song that accompanied Hibiya’s fourth and final “dream” in the fourth episode of Mekakucity Actors,  as performed by the vocaloid Hatsune Miku. We noted how the lyrics matched the events of the dream exactly, and that’s no accident; the song was a viral video that inspired the light novel, and eventually the Shinbo-directed anime. Hot summers and deaths-by-truck are no strangers to anime, but the events that unfold in the song and episode are nonetheless as catchy as they are specific. 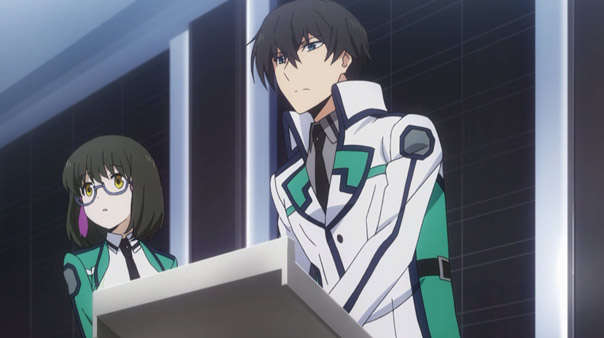 I may be a bit buzzed from a rehearsal dinner earlier this evening, but damn, that was one talky episode! I know this series runs 26 episodes, but I feel like episodes like this aren’t the best way of going about setting up conflicts. 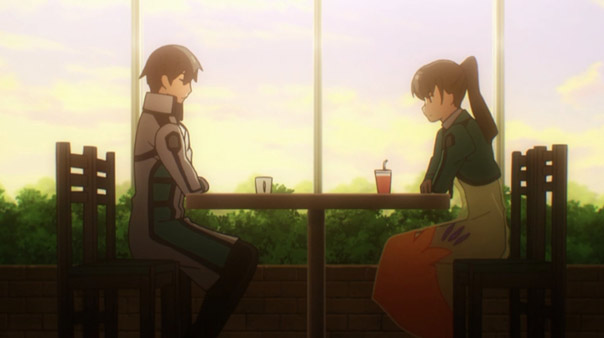 Mibu’s anti-discrimination faction finally makes their move, and Tatsuya’s relationship with Mibu pays dividends, as negotiations supersede violence, but the forum itself is a snooze-fest, with President Saegusa doing the lion’s share of the debating. There’s a lot of talking about stuff and not much of anything else. 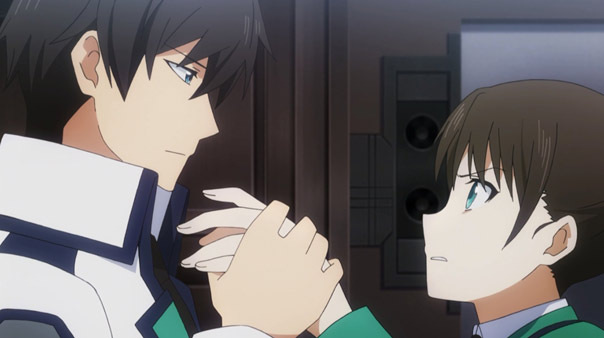 Even Hana-Kana can’t do much with the material she’s given, and all of the characters fall victim to the plot—a Course 2 uprising aided by Blanche and its associated groups. The school erupts into chaos quite suddenly, but we’re too bored by all the discussion to be that affected by it. 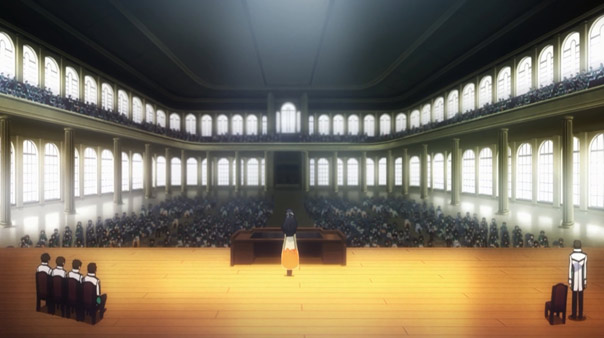 I’m frankly rearing for some action after all this blabbing, something this episode frankly didn’t provide. I’m not saying every episode has to be a full-scale magic battle, but throw me a bone here. With the Shiba siblings headed towards the action, it looks like the next episode might wet my whistle. 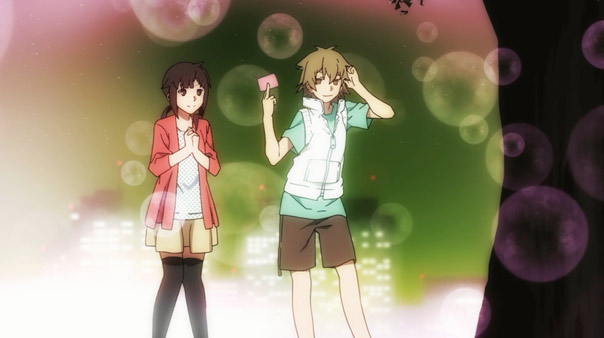 As of last week seven of the nine “actors” were known to me, so it stood to reason the final two would be unveiled this week. They are Amamiya Hibiya and Konoha, and the episode unfolds almost exclusively from Hibiya’s perspective. He told a string of elaborate lies to his strict father to gain permission to travel to Tokyo to spend the summer with his friend and crush Asahina Hiyori. 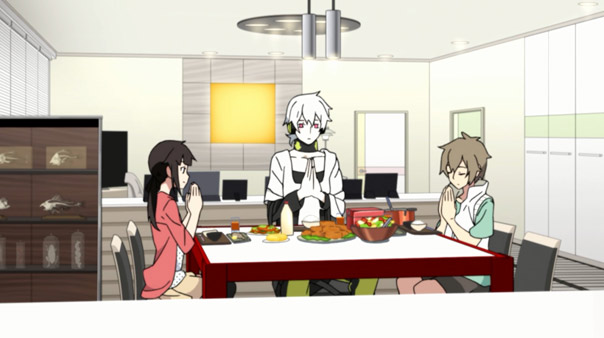 Our first exposure to Hiyori is in Hibiya’s head, an ideal of the girl he loves. In reality, she inivited him to be her slave. Worse still, a third wheel—Konoha—ruins Hibiya’s hopes of being alone with her, and she falls in love with the older albino instantly. Hibiya is shown to be a capable, confident person, but allows Hiyori to run roughshod over him; ironic considering what happens in the episode’s very cryptic second half. 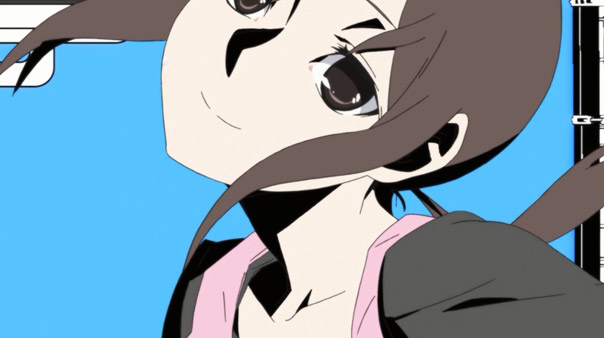 That’s when Hibiya goes to bed (with Hiyori fawning over Konoha deep into the night) and has a series of eerie, monochromatic nightmares in which he confronts Hiyori in a playground, but a black cat always comes between them and she ends up dead, no matter what he tries in the next “dream”, save the last one, when he pushes her out of the path of a speeding truck and gets hit himself. 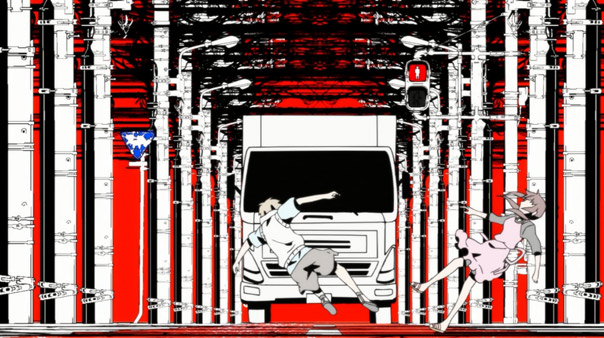 But it’s not exactly clear what’s a dream and what’s reality. Hibiya seemed desperate to tell Hiyori how he felt about her on this summer trip, but his opportunities were ruined by her hostile attitude and the presence of Konoha, and it seems as though she died before he was able to do so. We’re sure future episodes will shine a little bit more light on the events that transpired here, but I must say I found the dreamy, morose atmosphere very absorbing. 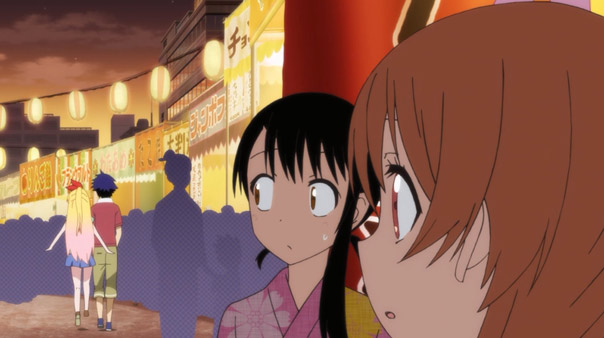 Inexperienced as he is in matters of love, Raku seeks clarity and guidance in the form of a romantic relationship charm, a popular item at the summer festival, further reinforcing its perceived power. But the charm proves almost laughably unhelpful, taking him on a tour of the vertitable smör-girls-bord before him, one girl at a time. 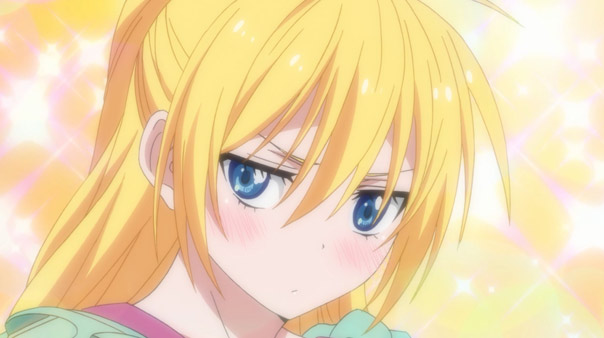 The festival and the charm’s “effects” on Raku and the girls also underlines the qualities they have going for them. Luck and circumstance are in Chitoge’s favor, as are looks (at least, she gets the most attention from random folk). Marika is the most romantically aggressive (and politically connected). Kosaki is a blend of intermittent bursts of aggression and/or good luck, typically followed by equal or greater portions of the exact opposite. 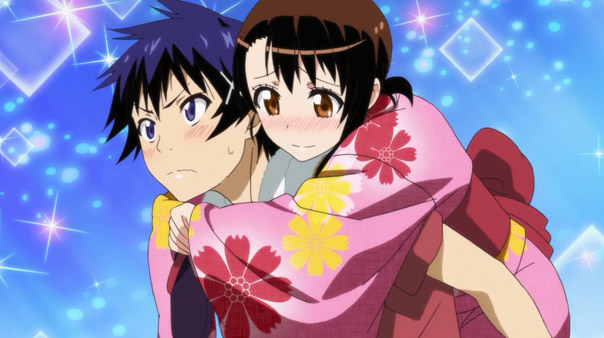 Perhaps it’s the fact Kosaki is something of a complete package—a Kosaki of all Trades, master of none—that makes her the most compelling choice for Raku, and the reason she’s foremost on his mind most of the time, including when he’s going after the charm. But on several occasions this week, Kosaki’s rightful place in his mind was usurped by Chitoge being so darned earnest and sweet. 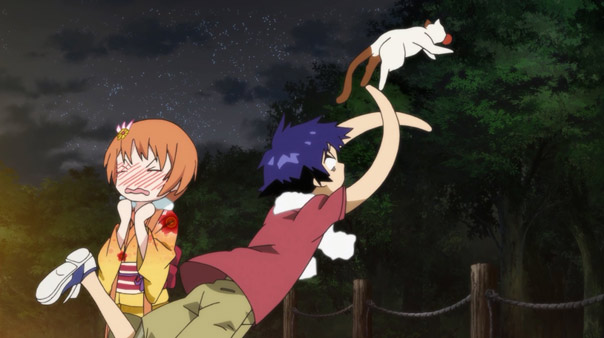 Raku would probably fall for Chitoge completely if she was like that all the time, but he only gets glimmers of that side of her, just as Kosaki only has glimmers of righteous aggressiveness or luck. But with a Kosaki-exclusive episode leading into a stock-taking episode with a steady helping of Sweet Chitoge, Nisekoi seems to be reasserting these two as the main contenders for Raku’s heart. 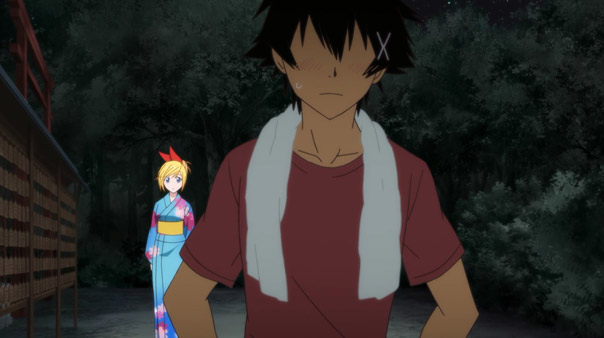 This is evidenced by there being less emphasis on Marika this week, and what emphasis there was being comedic in nature. At least here, her position looked much weaker than the original two, but of course that could change next week. A charm can show Raku which doors he has to choose from, and even open some of them a crack, but it can’t show him which one to walk through. Ahem…sorry for calling you doors, ladies. 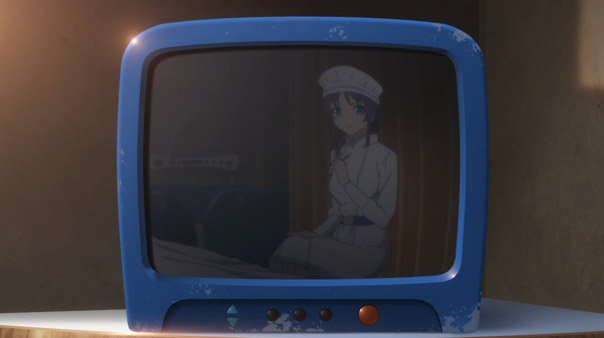 The big adventures and discoveries in the last episode give way to a quieter, more introspective episode focusing primarily on Chisaki, who was mostly absent from all that. The episode explores her thoughts and her heart as thoroughly as the others explored Shioshishio.This leads to some beautiful, touching, and often hilarious scenes with her alternating between the childhood and adulthood. 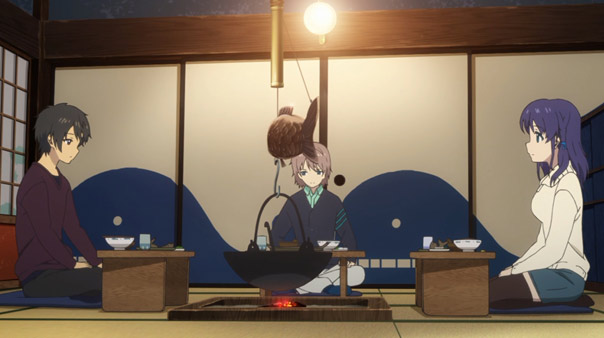 By all appearances, she the nurse and Tsumgu the researcher are a married couple, and Kaname is like their sour-faced kid who bristles when Tsumugu explains the pragmatic approach to everything that’s happened. Chisaki the Adult takes Tsumugu’s side, and Kaname excuses himself, making a snide comment about how much she’s grown up. This leads to her breaking out her old school uniform  (once cute, now sexy) and pouring herself into it, a deeply funny private moment that both guys invade when they hear her slip and fall. 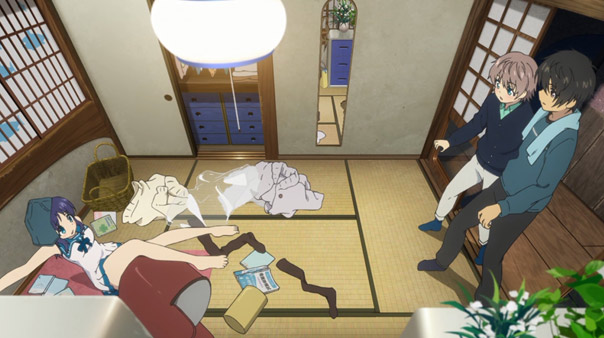 Chisaki also see that Miuna likes Hikari too, from the look in her eyes as she eavesdrops on Hikari talking to the still-slumbering Manaka, the bomb that will restart time if and when she awakens. Chisaki can’t not see her past self in Miuna, feel the futility and pain of not being the one. Between that and the result of trying on her old uni, she decides to pivot back to adulthood, insisting Tsumugu ply her with plum wine. Things get loose but never amorous, and she dozes off before Tsumugu and state an important truth. 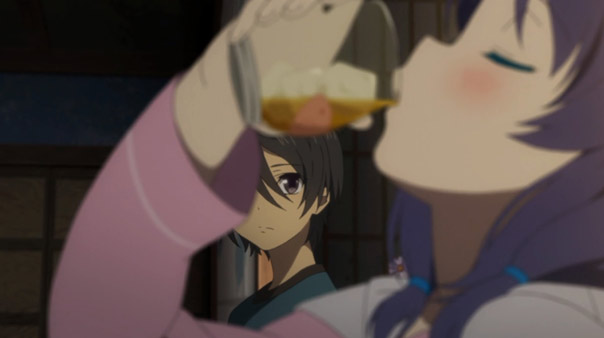 That truth is that he has filled the space left by Manaka for five years with Chisaki, which is what people do when they lose things in the transition from childhood to adulthood. Because he was able to do it, he’s sure she can too, if she takes the next step. Part of her back-and-forth this week is due to her realizing she’s the age Akari was when she had to decided between the sea and her love, mirroring the continuation of the Ofunehiki she hears from Tsumugu’s gramps. 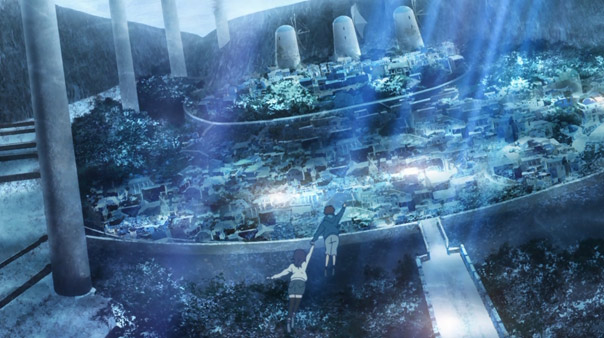 The rest of the story is that the sea god and surface girl are happy for a time, but she grows depressed and restless because her true love is still on the surface. The sea god finally allowed her to return, but in exchange for something—likely her ena—and sure enough, Manaka’s shattered. But when Hikari saves Chisaki from getting lost like he did years ago, she also realizes she still likes him. Nothing harder than growing up when the gaps you’re expected to fill with new things are still occupied by the old.