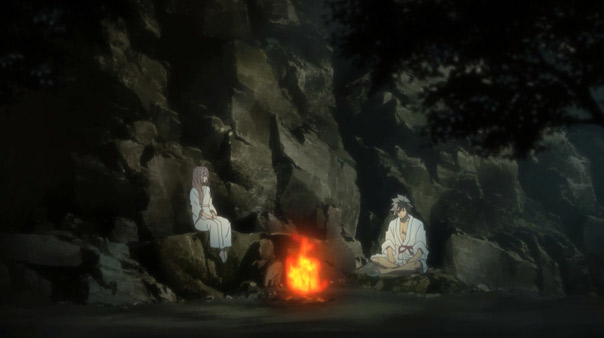 Nobu’s plan has failed, his army is in tatters, and scores of his people are dead or maimed, but you’d never guess he was in trouble from his demeanor. We were also a bit surprised that Caesar, still sore over being outsmarted by Nobu in the past, agrees to any sort of truce. We’ll call it an act of deference to Nobu’s sheer grit and audacity. Not only that, but this week, for the first time, you get the feeling Caesar would prefer it if Nobu were an ally rather than a foe.

Almost as much as the tea ceremony itself, we enjoyed the preparation that went into it, particularly that of Nobu and of Ichihime, who insists on being the host. We’ve always really liked the serene strength of Ichihime’s presence, but we always had precious few scenes with her; this episode corrects that by giving her a nice little brother-sister moment at the waterfall, and having her play an unexpectedly crucial role far beyond her services as tea-maker (at which she excels, by the way). 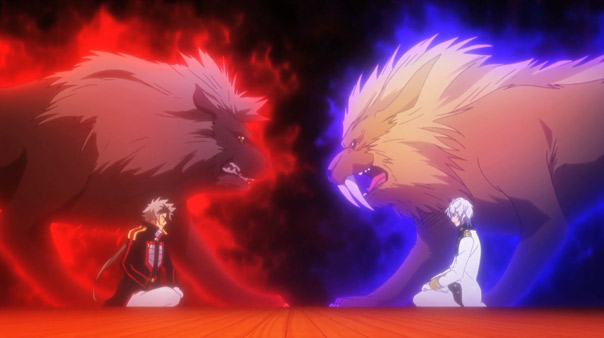 The show has perhaps been wise to keep her on the periphery, somewhat out of focus, much like Mitsuhide’s trio of kunoichi; these women feel like mysteries compared to the comparatively open books of Jeanne and Himiko. The truth of the matter is, Ichihime is just as bad-ass as her brother (if not moreso)…she’s just quieter and classier about it. And while she’s vowed to always stay by Nobu’s side and support him in all things, you get the feeling she does it because it’s what she wishes, not simply because she’s expected to.

That independent will is put on full display at the tea ceremony, which starts out normally enough, but when Nobu notices Caesar is uncomfortable sitting in the traditional manner, he relaxes the protocol, which relaxes Caesar. When things come down to brass tacks, Caesar wants the regalia in exchange for an end to hostilities and a military alliance. At this point we were thinking Nobu could answer either way and figure something out, but he decides to firmly refuse, while still insisting they stop fighting. 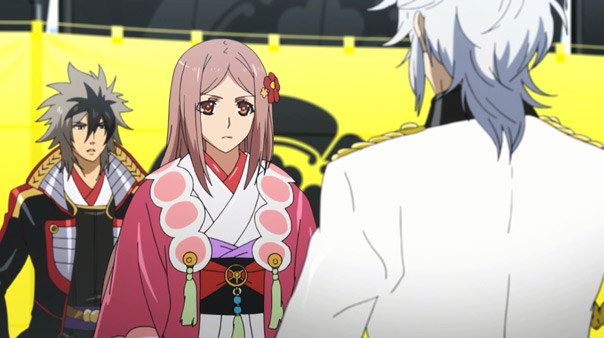 This is because Nobu suspects that Caesar’s boss Arthur, whom Caesar claims to be a Savior King as Jeanne insists it’s Nobu—perhaps there really are two of them?—is a pragmatic sort who’d prefer a minimum of collateral damage in his quest for the Holy Grail (or, like whatever). Caesar agrees to a temporary alliance if he can have Ichihime…and everyone protests but her. Knowing what it would mean if Caesar kept his word, and warning him she’d kill him if he didn’t, she makes another choice for herself and accepts his terms.

The tarot Jeanne draws this week is “The Fool”, and she immediately thinks of Nobu, especially when he loosens protocol at the ceremony. But the real “Fool” turns out to be Ichihime. Freedom, nonconformity, innocence, purity, cheer, possibility, imagination, and genius: these are all qualities she embodies more than anyone else at that juncture. She has become the wild card that could shape the fate of both worlds as much as Nobu, if not more. And after being so cold to her earlier, Mitsuhide seems particularly troubled by her choice. Sorry dude; you had your chance!