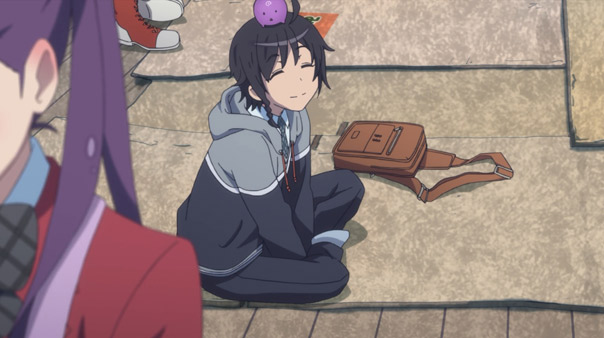 With Roboko in pieces, Natasha strung up like a chicken behind force-fields, and Goro in some kind of stasis, Zvezda continues to reel this week on the edge of total defeat. Hope still lives while Kate is free, protected by Itsuka, but her treasured doll Galatika is in Governor Jimon, who is annexing West Udogawa once and for all.

Asuta and Renge are on the run, constantly moving from one place to another as the special forces hunt them. It’s fun to see the two working together to survive after being on different sides for so long without knowing it. But along with the doll-less Kate, they’re unable to go on the offensive.

That changes when West Udogawa’s leader, who is harboring Kate, manages to get her one last canister that allow her and Itsuka to transform and make their stand at the very public annexation ceremony that Jimon always meant to be an execution as well, if Venera showed up. She does, and Jimon stirs the pot by destroying Galatika with the acrid black smoke from his cigars. So yeah, like the Prime Minister in Samurai Flamenco, Governor Jimon is some kind of superhuman. 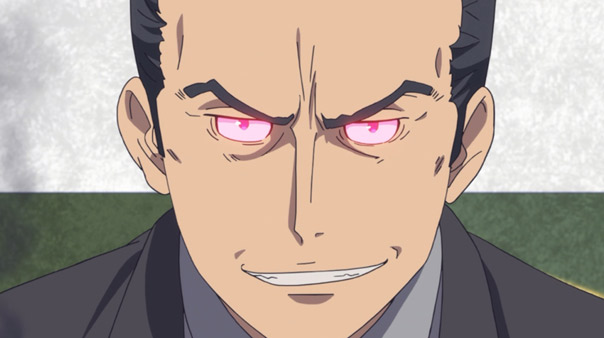 We flashback to ancient days when Kate first stopped growing in order to gain the power to conquer; we also see Jimon’s wife leave him and the family fall apart because his job is all that matters to him. We’re a little fuzzy on why Asuta “rejects” Renge and the two part ways, but his ambition to live in a world where people can make their own decisions is admirable. He need only brush Evil SuperDad aside and he’ll be golden! 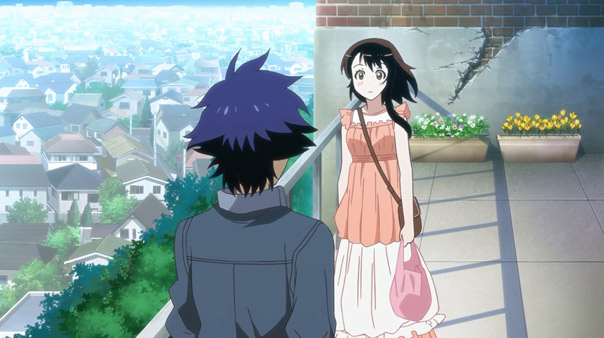 Jeez-o-Pete…is it really that common for five-year-old Japanese kids to make these kinds of promises? At least two girls seem to be convinced (or hopeful, in Kosaki’s case), that Raku is the one they made the promise to ten years ago. But of course, it can’t be both of them.

The sorting out once-and-for-all is put off though, due to two big events: first, Chitoge’s sixteenth birthday, and second, Ruri’s pairing up of Kosaki and Raku to go out together to find gifts for her. About the first part: the first sorta-not-really date between them is lovely to behold, the starting with Kosaki making sure she looks correct in the reflection of the same cafe window Raku is sitting behind.

The two are still under the mistaken impression that neither is interested in the other, until Kosaki finally exhibits some initiative, first by showing Raku her secret vantage point of the city (which is gorgeous and calls to mind the end of Whisper of the Heart, of all things), but also calls him by name. Flustered by all this sudden affection, rather than ask what Kosaki’s birthday is, Raku accidentally asks if she was the girl from ten years ago.

Her affirmative response shocks him even more, along with us: we don’t know what’s gotten into Kosaki, but we like it: no longer mincing words or hiding her feelings. She and Raku come so close to embracing when Raku’s phone rings, which is incredibly lame, but that’s okay; some progress has been made. Not as much as we (or Ruri) would hope for, but some.

That brings us to the ridiculous party Claude and the rest of Chitoge’s yakuza family have prepared, complete with Claude’s Claudey, gaudy gift of a Maybach Excelro, which is indeed quite exclusive; we love how the license-less Chitoge could care less. We also like how Raku’s gift of a gorilla doll that looks kinda like Chitoge moved her much more.

When the two end up on her balcony, she asks if he still likes the girl he made the promise to, thinking it was her, and he says yes, thinking it was Kosaki. But it isn’t as if he doesn’t like Chitoge too. Slowly, information is being distributed to various parties, but the matter of who made a promise to whom back then remains a vexing mystery. 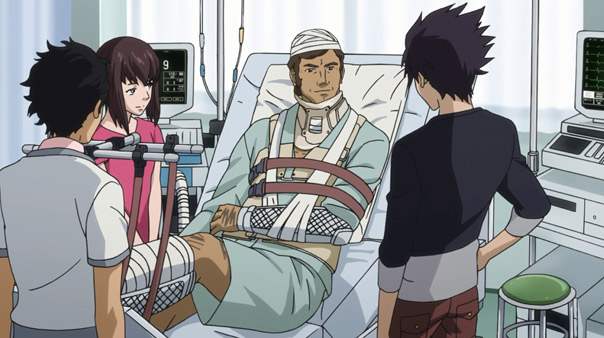 As it turns out, Sawada Haiji is indeed a real person, but Masayoshi is no closer to finding him or predicting his next move, let alone defeating him. His first targets this week are Moe and Mizuki, who collapse on stage after drinking drugged coffee before their LIVE PEACE concert begins. In Mari’s defense, there wasn’t much she could do with Masayoshi’s warning. But the point is as clear as it was last week: none of his friends are safe.

The Flamengers aren’t that worse for wear (Sakura’s new hairstyle is excellent, as is the sniping between her and Joji’s wife) and Joji is conscious and on the mend, telling Masayoshi he saw the boy described and hear him mention Samumenco. Joji is not the most reliable witness, but later it’s confirmed when Haiji kidnaps Goto. Joji also tells him the ultimate weapon they have against evil is love. Only problem is, Masayoshi doesn’t know what that is.

While the fact that Haiji is a real person coordinating all these attacks without leaving any witnesses or evidence strains credulity, but compared with some of the other outrageous things that have happened in previous arcs, it’s plausible enough, especially when we learn more about his story and realize just how hard he’s been working to become the ultimate villain.

Back to love, and what we thought was the best part of an episode full of meaty character moments: while he thinks about Joji’s words in the cab with Sumi, he remembers turning down a girl in school who liked him. When Sumi asks him what’s up, he does the exact same thing, totally oblivious to the fact Sumi could help him. Fortunately, Sumi takes him by the scruff and spells it out for him, as she must…in the nick of time, too, as Masayoshi had been considering taking his own life to end Haiji’s rampage.

The show’s been very subtly ratcheting up the chemistry and romantic tension between Sumi and Masayoshi, and we love how she is the one to explain love in all its forms to him, as a very likable character who has been somewhat underutilized due to the show’s deep bench. We also like how she knew about him being Samumenco all along, but let it continue. But most of all, we like how she casually confesses her “technical” love for him. We still hold out hope this will go somewhere.

Really, the show has been about different kinds of love all along, starting with the love a hero must have for the people and ideals he protects, the brotherly love between Masayoshi and Goto, the unrequited love Mari has for Goto (or Moe for Mari), Sumi’s love for Masayoshi, the love that drives Goto to text his dead girlfriend, the love between a married mentor and his protege, and lots more. Then there’s the love that shook Haiji out of his apathetic existence, but twisted him into the final boss in the Samurai Flamenco saga. 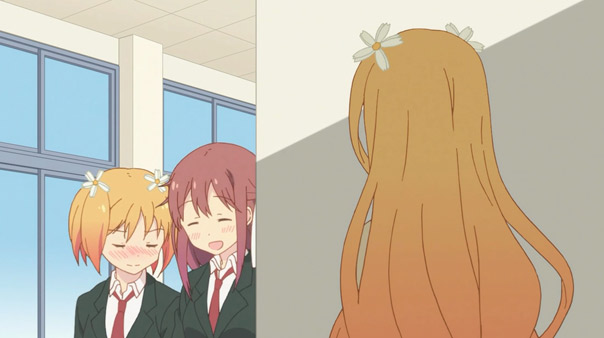 In spite of Trick’s light, feathery, low-stress, non-confrontational tone throughout its run, we had a feeling it was waiting until the end to finally unveil a major conflict regarding Haruka and Yuu. The first half of this episode was almost suspiciously mundane, as we meet Mitsuki’s replacement SumiSumi (who talks like an old man) and everyone brainstorms an event to honor Mitsuki and Vice President Sakai.

It’s all pretty standard fare, complete with Haruka and Yuu making out near the end, until you realize they’re not hidden away somewhere, but in the school hall for any passersby to see. And Mitsuki and Rina do see; the lovers’ increasing boldness has gotten them caught. Mitsuki angrily scolds them, but directs it all at Haruka, forbidding her to kiss Yuu.To Rina or any other casual observer, this would seem like normal conservative big-sister behavior.

But we know better what’s eating Mitsuki. The moment she chided Haruka to “wake up”, we knew there was the possibly she’d realize it was time she woke up herself about what she’s feeling. Scolding Haruka was less about protecting Yuu or upholding wholesome values, but about deep-rooted and repressed jealousy.

Subconsciously, she’s making it so if she can’t have Haruka, no one can, and certainly not Yuu. Despite her dalliances with Haruka, Yuu is still a “good girl” who respects her elder sister’s authority (not knowing about the jealousy influencing it) and keeps away from Haruka, but doesn’t like it.

We like how rather than despair and mope like she might in the past, Haruka stays positive and figures out she can still kiss Yuu if they’re sold as stumbles and trips; capitalizing on her reputation for clumsiness. But one can only keep that up for so long; and it doesn’t solve anything.

Still, it is notable that after getting away with everything for nearly a year, Haruka and Yuu’s sakura-colored relationship is in trouble, because they weren’t careful, but also because Mitsuki has ulterior motives. But it isn’t treated like the end of the world for them, only the potential start of a new world for Mitsuki, as she finally considers the fact she’s in love with Haruka too.