With two pairs of students the only thing between The Barco and the enemy dreadnought, we went into this episode fully prepared for the eventuality of at least some of them dying in glorious battle, saving the ship in the process. So it came as something of a shock when, despite several close shaves, nobody we know is killed. Rather than kill off more cast, the episode packs a triumphant wallop, and the show’s steady rise in our Winter rankings proceeds apace.

Noriaki and Benji find their courage in the sky and get the Barco’s guns the info they need to take out the enemy. We thought for sure they’d be gone when Benji ended up losing a hand, their plane was blown up, and they ejected, but Banderas somehow found them and returned them to Isla. Which is fine; Benji did promise Sharon he’d be back —and makes good use of her scarf as a tourniquet!

Noriaki and Benji are able to complete their mission thanks to Kal and Ignacio, who turn out to be an ace pilot/gunner duo, who’d likely perform marvels in a real warplane. Still, all they have is their dinky trainer, they do plenty of damage—enough to strain credulity quite severely, in fact. While the lads fight, Claire pouts on the bridge of the Barco, unable to do a thing…until, quite unexpectedly, she is.

When the Barco’s engines are disabled by a barrage of enemy fire and she starts to sink, Nina calmly contemplates her death there and then, until Kal flies over their bow, and she runs out to the deck, loses the Nina wig, and re-declares her love for him, despite all she did to him and his family. When Kal whizzes by again (so Ignacio can take out the plane targeting her) he doesn’t yell “Die!”; he yells “Live!” And she does. 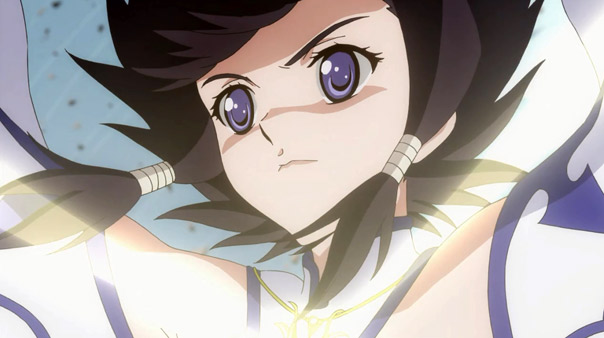 Kal and Claire’s romance was something that fell by the wayside once their real identities came out, but here, it proves absolutely essential in saving the day. Because Kal remembers and finally heeds the words of his mother, forgiving Claire, who he loves despite her past, Claire is able to summon the wind again, taking out the enemy squadron and stopping the Barco’s fall.

In the crucible of revolution, the seeds of Kal’s hate were sown, but that was the war of his parents. Now that he’s in the middle of his own war, protecting those he loves (including Claire), and he’s seen that hate for what it was: an indulgent burden that hampered his usefulness. In order to live, he had to let it go.