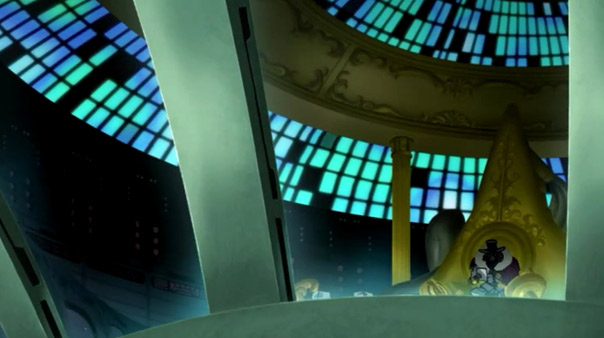 We open this episode with gifted scientist Dr. Gel so deep into complex, esoteric calculations, he doesn’t even hear Admiral Perry’s orders to invade the library planet Lagado. Gel’s assistant Bea, who seems like a capable chap, takes command. Meanwhile Dandy is trying to register a rare alien in a box he isn’t supposed to open for reasons he forgets. When the box is opened, sirens blare, a booklet and ticket to Lagado are revealed. While we suspect Gel’s calculations have something to do with all this, we are, for the moment, as confused and clueless as Dandy.

This episode gradually reveals its premise regarding the Great Librarian of Lagado (an alien in the form of a book) being checked-out by Admiral Perry because Dr. Gel said he needed it. The book manipulates Dandy & Co. to steal her from Perry, then manipulates them to successfully escape from the Gogol fleet and return her to Lagado. She had a desire to see the outside world with her own eyes, not merely in print. Now home safe and sound, she rewards Dandy with the box we see in the beginning, which they open again to reveal a videotape…and the cycle continues.

This episode was a showcase for Space Dandy’s uncanny ability to open an episode with a messy pile of disparate building blocks but end up with a relatively sturdy, recognizable whole by the end. The episode does so stylishly too, adopting a totally different aesthetic for the time Dandy, QT and Meow are being manipulated by the book, with most of the color being sapped out of the world, lighting becoming more dramatic and textured noir-ish. It’s a fitting depiction of the somewhat hazy, incomplete nature of memory. 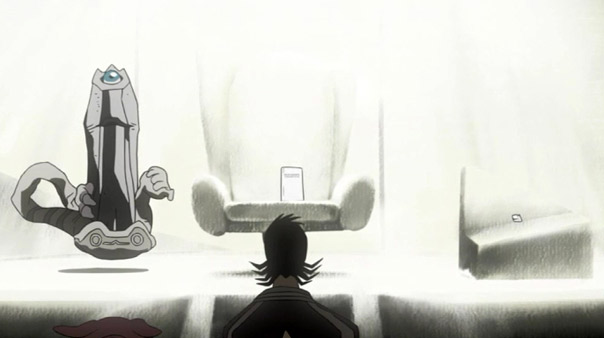 All the sci-fi mystery aside, the episode also manages to make a fairly unadorned commentary on the consumption of media. Whether it’s books, tapes, laserdiscs or floppies, mankind’s drive to record anything and everything is absolute and unrelenting. Such media provides their consumers with thoughts and ideas they didn’t have to come up with on their own, which can lead to those consumers being manipulated and their very lives directed by said media.

For us, that media is anime: we can scarcely get enough of it, and we schedule chunks of our lives to watch and review it. We’re not much different than QT sucking up punch cards of smooth yet bold-tasting data; it’s just a matter of complexity. And with the ultimate knowledge of the cosmos taken to its extreme, we witness Dr. Gel finally comprehending everything, leading to his destruction; moderation was not practiced. But hey, at least we now we know why the end credits contain all those weird calculations!