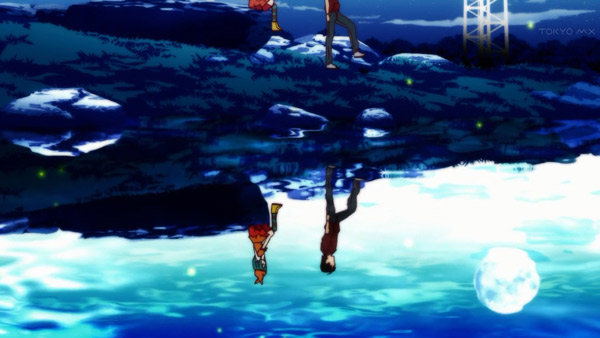 After Shinobu’s monologue, Ononoki reveals she’s been there the whole time, listening. She and Shinobu argue until Mayoi comes to and Koyomi assaults her, earning the ire of all three girls. Ononoki suggests they ask Gaen Izuko for answers. Just then, the “darkness” reappears; Koyomi and Mayoi grab onto Ononoki, who uses Unlimited Rulebook to escape. They end up in the mountains, and Koyomi gradually realizes he and Shinobu are no longer connected. His shadow mixed with the darkness, severing their link and reducing the power of both. With few other options, they search for a working phone, and at the first house find Gaen Izuko.

Since next week will feature the “person who knows everything”, it’s likely we’ll learn more about the “darkness” that’s been chasing Koyomi, Shinobu, and Mayoi, and has now managed to snatch Shinobu away. But at the moment, despite Shinobu’s masterpiece of a monologue last week, we still know very little about it. It’s not an oddity, so neither Shinobu nor Koyomi have any kind of edge over it. We also know it has the ability to snatch the likes of Shinobu from Koyomi’s shadow, suggesting that could’ve been it’s aim all along. But perhaps Shinobu’s story presented another clue: Shinobu was only able to grab the hand and wrist of her companion from the darkness, and then used them to bring him back as her minion, who later offed himself.

But what if the rest of his body remained in that darkness, right up to the point it briefly merged Koyomi’s shadow and tore Shinobu away? Again, it’s probably silly for someone who didn’t read the source to make wild guesses just a week before they may well be revealed, but we thought we’d hazard a guess, since what we’re suggesting makes a little bit of sense. But of course, when talking about something as abstract and nebulous as this “darkness”, which suddenly appears without warning and scares the shit out of everyone, over-conjecturing things may prove a waste of time. At any rate, the idea of Shinobu being separated from Koyomi is an unsettling one regardless of circumstances, now that we know more about who and what she is. 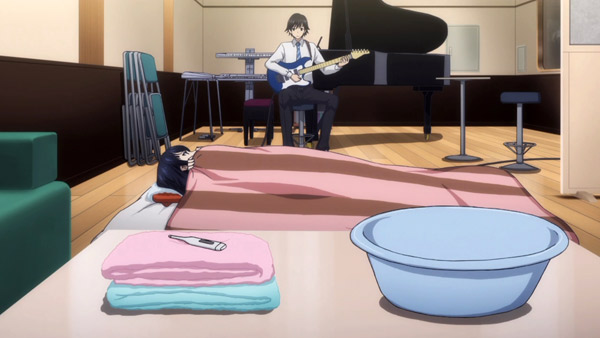 Haruki dotes on a bedridden Touma, who insists on moving her futon to the studio so she can watch him practice his solo. Both of them miss their rehearsal at school, and Setsuna is simply unable to sing without them. Touma tells Haruki about how she almost quit the piano after her mother left for Paris without her, saying there was no reason to bring her. The next day Haruki very publicly steals Setsuna away and they take the train to Touma’s. Haruki and Touma show a third song that they wrote the music and lyrics to, which she’ll sing as their final piece at the fair. They only have 24 hours left to practice.

This Haruki guy is one smooth operator. Swooping in as the white knight on his horse whenever his damsels are in trouble; be it Touma’s fever or Setsuna’s anxiety. Rejecting Haruki’s calls to cancel the show if she isn’t better, Touma is committed to seeing it through to the very end, as promised. But as she lies on her side watching Haruki practice, the concert isn’t all that’s on her mind. It’s Haruki himself, and the fear he and Setsuna are going out. Meanwhile, throughout Haruki’s extended stay at Touma’s, Setsuna herself is just as fearful there’s something going on with the other two. Whenever either of them are alone with Haruki they’re on cloud nine, and to be truthful, so are we; it’s far less stressful when he’s warmly interacting with Setsuna or Touma one-on-one.

But this lovely “truce” (or “purgatory”) can only last so long. Specifically, it will only last until the light music club has their concert, plays their songs, and takes a bow. Once the lights go out on that stage, their shared goal will be fulfilled, leaving only their own individual goals. We know at this point that both Setsuna and Touma’s like Haruki, so their goals are obviously in conflict. Haruki’s goals beyond the concert remain murky, though the third song (which happens to be the OP), sheds a little light: he joined the music club so he could write that third song; it’s his “dream.” But as he doesn’t explain why it’s his dream (only that it is) and we’re left to ponder the significance—and the true subject—of his lyrics. (Setsuna’s momentary lip-bite suggests it’s not her). He’s wisely held back on breaking anyone’s heart for the sake of club cohesion, but surely he’s smart enough to know he can’t keep that up forever. A reckoning is coming. We can’t wait. 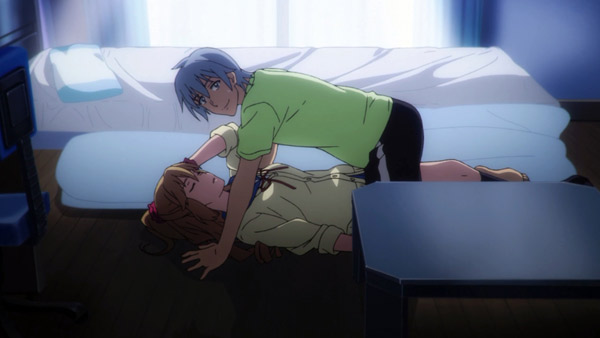 Kojou and Yukina meet Vatler, who is accompanied by the Lion King assassin Kirasaka Sayaka, who doesn’t like Kojou hanging around her friend Yukina. Vatler wanted to meet the man who essentially consumed his lover, but also notifies them about the presence of Christoph Gardos, whom Yukina vows to deal with herself. When she and Kojou meet with Natsuki for intel, she tells them she’s on the case, and to focus on not letting Vatler devour Kojou. Asagi decodes information on Nalakuvera, an ancient weapon Gardos may be after, while also setting to work attempting to “seduce” Kojou. Sayaka notices Kojou’s “infidelity” and ambushes him on the school roof. When she cuts him, his vampire powers release, in plain view of Asagi.

This show is a bit too qualifier-happy. Lord Blah Blah of the Blah Blah informs Kojou of that Blah Blah Gardos of the Blah Blah Faction is after the Blah Blah Weapon. Piling titles upon titles and organizations upon factions just makes for a whole lot of proper nouns we’d rather not have to memorize. Still, while there’s plenty of supernatural political intrigue, with Kojou in the middle and the target of many interested parties, the show doesn’t forget that not long ago he was just a regular high schooler, who is still hanging on to a decent chunk of his normal high school life. As many problems he has on the supernatural side of things,almost equal importance is given to the love triangle the show is committed to sticking him in.

What really makes it clear is just how angry and jealous she gets when her rival Asagi starts resorting to extreme seduction measures. Asagi likes Kojou and relieved to hear he’s not dating Yukina, so makes her interest in Kojou abundantly clear to him whenever possible. Still, Kojou doesn’t seem interested in really dating anyone at this point. Part of this is practical—he can’t control his vampire side if he gets too…excited—but it’s also because his normal side is being disappointingly dense and indecisive. DURRR U MAD YUKINA… DURRR WHY ARE U LYING ON TOP OF ME AND BLUSHING ASAGI DURRR…really? Sort it out, dude. We’ll also see how Asagi deals with Kojou’s dark side.