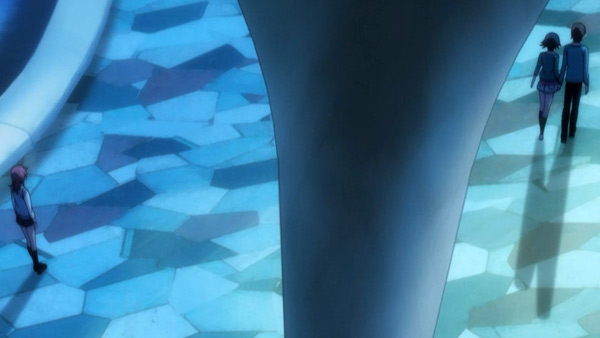 A year and a half after moving to Tokyo, Haruto is now in university and dating Asuka. He decides to get a job at the Lawson Market to pay for a beach trip with her. He bumps into Eba Rin at the market. Haruto’s friend begs him to attend a group date, and he gets permission from Asuka. On the date he encounters Yuzuki, who is still single. While Asuka is at the market with Haruto, Rin shows up again, and mentions Haruto seeing Yuzuki, making Asuka jealous. When Rin appears again after his shift is over, he walks her home, but she voices her concern that he’s “settled” for Asuka, when Yuzuki or even she herself could make him happier. Haruto accepts the challenge.

After Kyousuke died, Haruto abandoned his quest to win Yuzuki back. Dating your dead friend’s girlfriend – or vice versa – was always going to be difficult, and Yuzuki definitely didn’t seem interested in pursuing anything. So what did Kyousuke do? What we told him to do ever since he met Asuka: date her. And by all accounts, it seems to be going splendidly! They make a cute, logical, domestic couple. They make sense. He cooks for her, she steals kisses from him, they make long-term plans together (which will probably never materialize, knowing this show), and when they end up on the floor they seem to have every intention of capitalizing on the situation…at least until the phone rings. You gotta answer the phone in that situation, right? (Sarcasm.)

And then Rin has to show up and ruin everything. Yuzuki shows up first, but that’s just soap opera coincidence; Rin straight-up stalks Haruto for the entire episode, loitering around his workplace and waiting for his shifts to end. Haruto may think she’s “grown up” but her behavior this week suggests she’s the same selfish, spiteful, conniving brat who tortured her half-sister for years. As much as we hate her, she has a point: Haruto didn’t uproot his life and move to Tokyo for Asuka. But there’s nothing really wrong with Asuka. Rin just wants to set something on fire just to watch it burn, and Haruto’s dumb enough to take the bait. For all of her complaining about Haruto “settling”, she sure settled for a easy mark.

The camera keeps going baack to a bouquet of four tulips throughout the episode: we decided to attach meaning to them, even if that wasn’t the intention (though if it wasn’t, why would they feature them so prominently?)

When we first see the tulips in Asuka’s arms, the yellow and white are together, like her and Haruto… 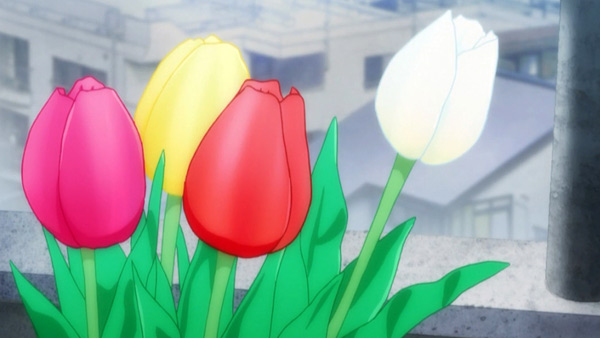 …Then she places them on the balcony, and the yellow is obscured by the red and purple, foreshadowing what will happen in the episode.

When Haruto decides to get a job so he can take Asuka to the beach, a white petal flies past her face, but then off the balcony and into the sky.

When Haruto and Asuka are interrupted by a call about the group date,  the yellow is now in the front with the white beside it, but the wind makes the red one peek out from behind…

…And when Haruto returns from the group date, it’s the same deal.

After she learns about Yuzuki, Asuka separates the purple flower and admires it…but the red is now in the front, between the yellow and white, foreshadowing Rin coming between Haruto and Asuka. 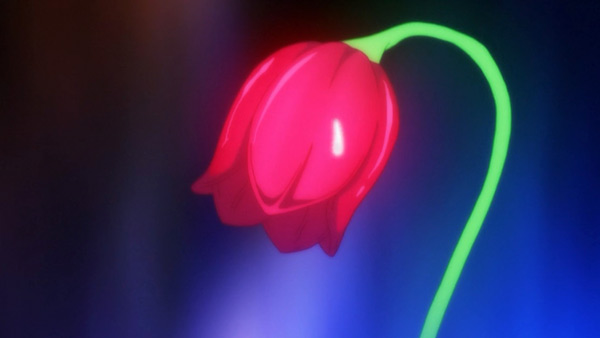 In the last shot, a drop of water falls from a drooping but opening red (or purple) tulip.