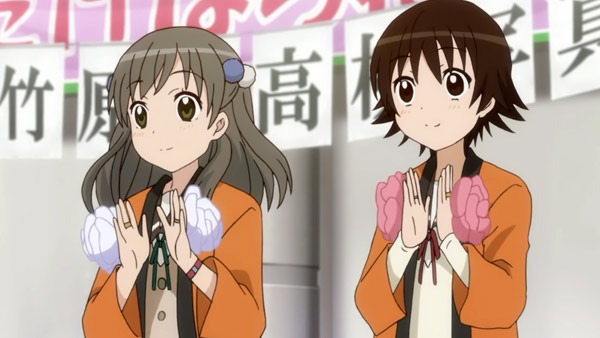 Potte and Kanae snap pictures all over school and town, but still haven’t decided on what to perform at the Cherry Blossom Festival. Dougou suggests they perform a dance as he plays the guitar, with the photos as a backdrop. They then visit the stage in the middle of the park, which contains one thousand cherry trees, each one planted in honor of someone. Potte and Kou’s mom tells them they have trees too, but they were planted somewhere secret. On the day of the festival Dougou is injured, but Potte and Kanae improvise, singing and dancing to a folk tune, and the crowd responds favorably. After the performance, Kou and Komachi show Potte and the others their trees, which Momoneko helped him locate.

In Bleach, Senbonzakura is the name for Kuchiki Byakuya’s bankai, a devastating cloud composed of millions of tiny petal-like blades. But here, it’s just the name of a cultivation project in Takehara’s public park. (Go figure.) One thousand trees were planted, each in honor of people the planters loved. In the case of Kaoru, Potte, and Kou, they were planted when they were born, and have grown larger and stronger as they did. Those trees are one more discovery that brings Potte closer to her dad, to the point where she even gets to “see through his eyes” by taking a photo of the tree from the same angle he did. The tree changed from photo to photo, but the sky and mountains remained the same.

They’ll be the same long after both Potte and the tree pass away, as well. But until then, Potte wants to return the love her father had for her and the town by making her mark on it as he did, through photography. When her performance hits a snag, President Potte refuses to give up, and she and Kanae put on a show not just to stir up interest in the club, but as thanks for everyone who pitched in with ideas, assistance, and emotional support. They didn’t bring the house down, nor did they perform beyond their abilities, suddenly turning into talented idols. They just hunkered down and did their honest best. We wouldn’t be surprised if they’re rewarded with more prospective members.\

Bell agrees to open a portal to the Demon World Acropolis, but Wolf kicks Staz in before she’s finished, and Staz ends up in her apartment. After taking showers, Staz tells Bell the story of how his brother Braz T. Vlad performed endless deadly experiments on him as a child, culminating in shooting him in the heart with a magic bullet that sealed his powers. Bell, attracted to men more powerful than her, wants Staz to make his brother remove the seal.

Meanwhile, Wolf and Mamejirou look after Fuyumi, but when she exhibits acute leprosy and starts to turn transparent, Wolf speeds her to a demon physician Frankenstein. After Bell drops Staz off outside the base of the Acropolis, he’s promptly ambushed by his little sister Liz T. Vlad, who throws him into her jail. He presses the “Challenge” button in his cell, and he’s sent to a room where Liz presents him with two powerful zombies he must defeat to be released.

You can’t say Blood Lad offers you great bang for the buck, as quite a bit goes on, some new foes are introduced, and everyone is given something to do in this episode. We also liked the seamless blending of casually hanging out with more serious themes. About those foes; they’re technically Staz’s family, but they no longer acknowledge him as blood. Hell, Staz can’t even get near the castle, as his sister is determined to destroy him. While that’s going on, Wolf is babysitting Fuyumi, unaware that she needs regular infusions of Staz’s blood to stay solid.

When Staz and Bell and Wolf and Fuyumi split off, you get the feeling they’re pairing up, too. After all, Bell is well aware Staz is more powerful and less stupid than he lets on, and gains a lot of sympathy for him after hearing his harrowing tale. Wolf also seems to be into Fuyumi, and you have to wonder that whatever Frankenstein cooks up to halt her vanishing will clash with the original purpose of Staz’s quest: find out from Braz how to resurrect her.

The night of the Gozan Fire Festival arrives, and the Shimgamo family ascends into the sky with the port wine-fueled tearoom. Akadama gradually accompanies them, and they’re joined by his friend; the two recount the “False Nyoigatake Incident” and how Soichirou scattered the Kurama tengu.The Ebisugawas arrive in a grand flying boat (with Benten aboard) and harass the tearoom with fireworks. Yasaburou and his mom return fire, ignoring Yaichirou’s pleas for calm. The Ebisugawas grab the tearoom with an anchor, but Yasaburou ruins their ship and blows them all overboard with one of Benten’s folding fans. Akadama drinks the last of the wine, the tearoom crashes, and Yasaburou loses the fan.

There’s nothing like a great party, and the Kyoto tanukis certainly know how to hold one. Being suspended high in the air aboard grand ships and eating and drinking way too much is definitely a way to do it, but another tradition, their annual antagonism of the Shimogamos via sky battle, goes too far and strikes a nerve. Yasaburou in particular, disgusted by his older brother’s sniveling propriety, decides to take up the mantle of protector of the family’s pride and honor, if only for the night. He and his mother know that sometimes bullies need to be given a bloody nose. Benten, meanwhile, literally floats above the fray, drink in hand and aloof smirk on her face.

Interestingly, someone we don’t see is Yasaburou’s betrothed, Keisei, whom you’d think would be on the family boat he ultimately sunk. The party environment would have been a good chance for them to interact, but things got too adversarial too fast. We also enjoy how the party was also a venue for Akadama to stop pining for Benten for five minutes and reminisce on better times. The flashbacks continue to portray Soichirou as every bit the awesome badass everyone builds him up to be, making it that much more shocking that Benten made him into soup. Benten helps Yasaburou this week, but is she merely sizing up her next meal?

Haruto knows Yuzuki is home, but Rin tells him she’s out anyway. He’s reminded of the time he got sick working so hard to support Yuzuki, worrying her; it leads to her kissing him. He takes it the wrong way and the have a fight, but reconcile after he picks her up in the rain. Back in the present, Haruto goes to festival at Yuzuki’s school with his classmate Nagoshi Mina in hopes of finding Yuzuki, but Mina thinks it’s a real date. Yuzuki sees the two of them in the haunted house, and after Haruto searches the school, Yuzuki confronts him in a classroom and tells him flatly that she’s already dating someone, and to forget about her.

When the person under the ghost sheet that scares Yuzuki’s date into grabbing him tighter turns out to be Eba Yuzuki, Haruto’s target, the series seemed to be asking us: is Haruto chasing a ghost? The flashbacks paint a picture of an idyllic romance with rough patches leading to green pastures, and it’s all very romantic. But that’s all they are; flashbacks, from his point of view. Since Yuzuki left, a lot of time and distance has built up, and the girl he knew, whom he fell in love with, and the girl he’s desperately pursuing in the present aren’t one and the same, and it’s dangerous to let the past Yuzuki inform him so completely. But it’s hard to sympathize with guys like Haruto who are after the one girl they can’t have, even if it’s a relatable scenario.

That’s simply because he’s not exactly lacking in the potential mates department. The series seems to go out of the way to portray his relationships with Mishima Asuka as sibling-like and unromantic, but there’s potential there. As for Nagoshi Mina, she’s an really cute single girl who literally falls in his lap, but again the series underplays their compatibility with her irritating score-keeping (accidentally lifting up her dress didn’t help matters.) So Haruto is trying to re-stoke an old flame, the damp wood is only making smoke, and he can’t see the forest for the trees. Worse still, Yuzuki’s rejection isn’t as clear-cut as it looks on paper: Haruto could easily dismiss it as more of her trying to act tough when she’s a crybaby. Haruto doesn’t believe in ghosts; he thinks Yuzuki’s the same as she always was.

While Haruto is telling Rin she can’t dissuade him from meeting with Yuzuki to learn how she really feels, the episode flashes back to when Yuzuki first moved in with him. He was starting high school with all his middle school friends, including his crush Kanzaki Nanami, andd rumors about him and Yuzuki spread fast. At first Haruto sees Yuzuki as selfish, but her actions, which bring Haruto and Nanami closer together, prove she’s always thinking of others, even at the cost of her own.

Haruto’s relationship with Eba Yuzuki, the girl he’s uprooted his life just for the slightest chance of another shot at, had a rough, modest start. Her dad knew his dad, so suddenly she was in his house, on his bike, and at his school. Had she never entered his life, he’d have probably been fine, as there no evidence his life was any the worse for wear before she entered it. However, she did enter it, at the best possible time to create unwanted complication for Haruto. This episode efficiently laid out the conditions under which Haruto eventually fell for Yuzuki; and when he learned of her tendency to go out of her own way for others, putting their needs before hers.

Haruto may not be aware of it, but the minute Yuzuki meets Nanami and knew Haruto liked her, she began to sublimate herself for their sake. Ironically, that humility only ingratiated her more to Haruto, solidifying the triangle she created by showing up in the first place. Back in the present, Haruto thinks her behavior is an attempt to retreat from the battlefield and break that triangle, something Haruto isn’t cool with. In any case, he’s here to settle the matter once and for all (assuming it can be settled). Even if Yuzuki won’t answer texts, and even if she has a boyfriend as Rin claims, if Haruto is right, there’s still hope for them.