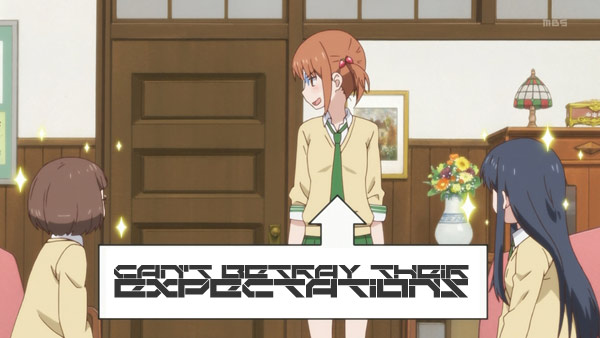 Riko tracks down the shy Tanahashi Suzune and finds out that she doesn’t hate her or Maki; she was just embarrassed to see them acting so differently than they do in public. Suzune apologizes to Riko and Maki, and they have a “Princess Carry” lesson. Riko and Maki receive harassing paper airplanes from the former president and treasurer, Enomoto Yuiko and Mizushima Sayori. Eno wants her position back, and Sayo wants to handle cash again, so she snoops around the room and very subtly “declares war” on them.

This week we’re introduced to the balance of Love Lab’s quintet. Suzune, the high-pitched, super-shy girl, and Eno, the eyebrow-endowed former president, wasn’t that exciting as characters go. The tall, money-obsessed, deep-plotting Sayo was more interesting. She sneaks into the Love Lab without being noticed, catching Riko, Maki, and Suzuno off guard, and as vindictive high school girls are wont to do, she declares war with a friendly smile and a wave, announcing her intention to ruin their reputations. We also like how she looks down on her boss, though calling Eno a “perv” probably goes too far.

Another running theme this week was Maki and Suzune’s belief that Riko is highly experienced in charming young men. She isn’t, but just isn’t able to come clean this week, or perhaps ever, so enraptured are her two “proteges.” Meanwhile, we actually feel kind of bad for Maki; here she was, the vice-president, just trying to do her job as quickly as possible, driving Eno and Sayo away. Now they want to come back for some reason, even though they’re not needed, and they’re willing to destroy Maki to do so. Hopefully the war is a brief one and Riko can hammer out some kind of mutually beneficial arrangement.

Kuroko is waiting up for Onee-sama when Touma is a the door. Kuroko lets him come up to the dorm to wait with her, but when the dorm supervisor arrives, she stuffs him under Mikoto’s bed. There he finds documents sticking out of her teddy bear, and learns about Accelerator and the clones. He sees that the next experiment will take place in just under and hour, and so races to Mikoto, heading her off on the bridge.

The Tree Diagram calculated her death in 185 moves against Accelerator, but she plans to foil its prediction by going down in the first, on the small chance it will cause the researchers doubt its other predictions and cancel the project. Touma won’t let her pass, and when she attacks with electricity, he doesn’t cancel it with his ability, and is knocked out. He tells her he’ll prove the researchers wrong by beating Accelerator, saving Mikoto and the sisters.

Had Touma not been worried about his treasured friend and gone to her dorm and been stuffed under her bed, he may have sat in that room with Kuroko as Mikoto let herself get killed by Accelerator; either by disguising herself as a sister or simply asking him to kill her in one shot, something Accelerator probably wouldn’t mind doing that much. But he was worried, and he wasn’t going to let that friend sacrifice herself for such a limited return. At first Mikoto assumes Touma has come to confront, scold, and possibly even punish her; something for which she’s prepared.

What she wasn’t prepared for was Touma putting his body on the line to show her his resolve to stop her, someone who on that bridge on that moment fulfilled the inner wishes Mikoto had long repressed as foolish: miracles can happen, heroes can emerge, and damsels can be saved in the nick of time. And most importantly, she has worth; worth that warrants finding another way to achieve her goals without sacrificing herself.

Just before Lights Out, a scared Maizono visits Naegi, who agrees to swap rooms with her for the night. In the morning, she doesn’t show up for breakfast, he finds her in his bathroom with a knife in her belly. Monobear summons them to the gym to announce the rule that in order to “graduate”, one must not only kill someone, but get away with it. To that end, there will be periodic “class trials” to determine who killed whom. Junko objects to this and steps on Monobear, but he punishes her by having her impaled by numerous spears. The class suspects Naegi killed Maizono, and as he’s investigating Maizono’s murder, the hour of the trial arrives.

And so we bid adieu to idol Maizono Sayaka and model Enoshima Junko; we hardly knew either of ye. Maizono died under mysterious circumstances, and many cryptic clues were presented before and after it happened, and we have at least five possible culprits in mind, (in no particular order):

It may be none of the above, but at least we won’t be executed for being wrong, like the class. This is an odd choice for a villain who wants the spectacle to last as long as possible; it could all be over at the first trial. However, because this is just the second episode, we know they’ll either choose correctly, or something will come up and postpone the trial. Either way, while he may be thoroughly stupid looking and sounding, Monobear is deadly serious, as poor Junko found out.