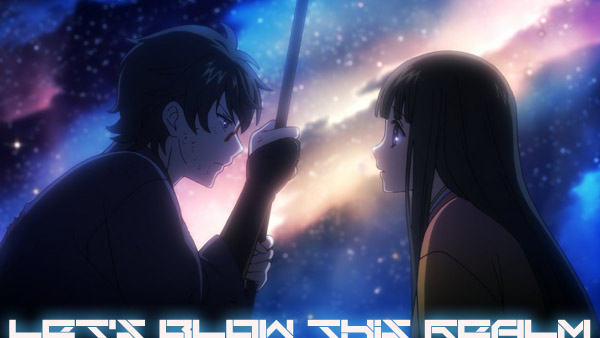 Frightened of the power she’s unleashing, Izumiko vanishes into the realm of the gods. Masumi leaves Mayura and joins her there, professing his love for her. Miyuki finds Takayanagi, who Izumiko turned into a dog. Without Masumi, he has to summon Wamiya to take them to the realm. They fight waves of ghost soldiers as Masumi sinks Izumiko into the role as Lady Hachioji, with him as her lord. Miyuki manages to summon the power to reach out to Izumiko by cell phone. Wamiya sends Masumi away, and then turns into Miyuki, who tells her to say she needs him, and they return home. The curse is lifted from the academy, the ghost army withdraws, and Takayanagi regains human form. As Izumiko considers Miyuki’s proposition, he falls asleep on her shoulder.

This was a fun finale! Masumi turns into the bad guy and tries to steal Izumiko away, who is so scared of messing up other people’s lives she’s willing to spend the rest of hers isolated in some celestial backwater, with only ghosts as company. Takayanagi finally gets his comeuppance for being such a pompous dick all the time and is turned into a little dog! Better still, he and Miyuki – never exactly friendly – actually team up to save the day. Miyuki has to level up against a zombie army. The conspicuous use of cell phones throughout the series comes to a creative head as Miyuki makes the impossible possible: both he and Izumiko get reception in the godswood!

Throughout RDG’s run we got the feeling that this was consistent, quality work, and all the pieces were there, only they were too seldom taken off the shelf to use. So we were pleasantly surprised when the finale did just that. All the pieces fall into place with style, making for an exciting and often moving completion to a series that could ramble on at times but eventually got to a very satisfying point when it mattered most. RDG ended on a high, rather than a meh, and actually left us hopeful for an eventual continuation of the story. Miyuki and Izumiko still have to ensure Himegami doesn’t destroy the world (again) while at the same time figuring out what they truly mean to one another, beyond divine vessel and bodyguard.