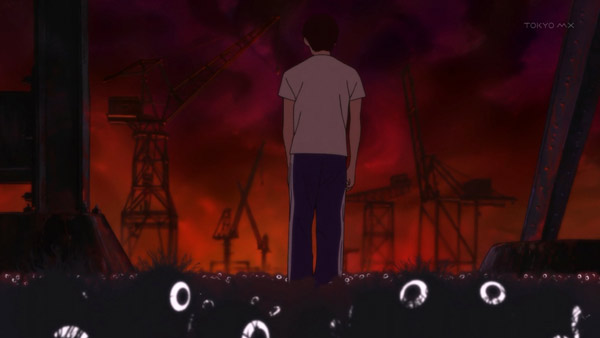 A month after being picked up by the cops on the hill, Kasuga has not spoken to either Saeki or Nakamura, keeps to himself, and talks little. Kinoshita makes him apologize to Saeki, and they formally break up. Going to be without eating and after vomiting, Kasuga dreams of taking a long walk into a field of flowers of evil. There he finds Nakamura, who tells him she’s disappointed in him for not breaking all of his walls. He wakes up, destroys his Baudelaire portrait, and begins to write a letter to Nakamura.

In a series full of tense “aftermath” episodes, this one was not the strongest, taking place a full month after last week’s events; a month in which not much at all seemed to have happened.  Instead of saying much of anything, this episode focused on painting the picture of Kasuga’s new bleak, hopeless, pointless existence. Saeki walks past him, classmates mutter around him, and Nakamura into trouble and invites ridicule, his mother cries and his father watches TV, but Kasuga has simply checked out. After he and Saeki officially break up, he is resigned to a lifetime of loneliness, “like a desert tree,” unable to escape the city he hates.

And then Kasuga has a dream. He’s content with living the rest of his life alone, but the dream asks the question: What about Nakamura…that crazy outcast girl who saw him take the gym uniform of a girl he worshiped? The girl who became his shadow, and the obsessed architect of his deviant renaissance? The girl who saw something in him, even if it was dark and sinister, that no one else did? Saeki might not ever have even approached Kasuga if he hadn’t defended Nakamura when she was being accused. Nakamura may well want to be alone, and not want pity or help from the likes of Kasuga. But he’s not going to leave her alone.

Commander Kugel orders Ensign Ledo to report to him immediately, and he obeys. At the same time, the fleet Kugel came with demands Pinion meet with them for negotiations. Kugel, confined to his cockpit, was able to take command of the fleet and has reordered society to maximize efficiency. Rukkage picks Pinion up, and after solving a aptitude puzzle, Kugel’s Machine Caliber, Striker, convinces him to combine his fleet with Kugel’s. Kugel’s acolytes immediately begin splitting up the Flange fleet boat by boat. Kugel unveils his next “awareness strategy” to Ledo: the target will be Gargantia.

“Maybe I never should have left my cockpit,” Ledo says, once Chamber and Striker calmly, cooly tell him how things will be going down now that Commander Kugel is in the picture. While Ledo left the cockpit, made friends, and developed a sympathy for the natives, Kugel has remained in his cockpit the whole time, whether because of his “endemic disease”, his desire to inspire awe in his followers with a shroud of mystery, or to maintain emotional distance from this world and its inhabitants. He believes mankind’s survival depends on him and Ledo teaching these humans how to defend themselves. That’s meant adopting a pseudo-religious cult of personality (since, with his technology, it’s not exactly hard), and fundamentally re-ordering the society of the fleet he’s taken command of to function like a military entity rather than a city or family.

There is no money, but intricate social gradation based upon individual skills. “Happiness” is rather laughably defined as “the realization of a circumstance in which the individual renders service to the entire group and the cost-benefit performance of that is at the greatest efficiency.” As a result, there are some in Kugel’s fleet who live well, and some who don’t get enough food, but it’s all deemed “fair.” The weak serve the strong and everyone’s eyes are on the same prize. Faced with Kugel, Pinion and Flange have no choice but to surrender, and things are starting to look very bad very quickly. When Ridget mentioned to Amy that Gargantia’s fleet will soon be passing close to Pinion’s, who could have guessed that’ll mean sailing straight into hell?